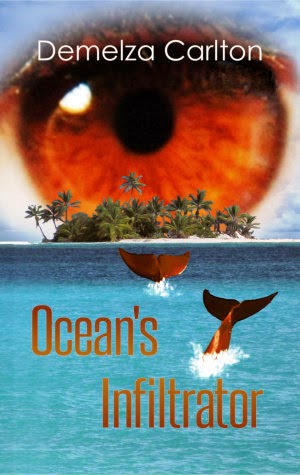 A warm WELCOME to Demelza Carlton and a book I've been looking forward to, "Ocean's Infiltrator"!  First, here's a little info. on Demelza:

Demelza Carlton has always loved the ocean, but on her first snorkelling trip she found she was afraid of fish.
She has since swum with sea lions, sharks and sea cucumbers and stood on spray-drenched cliffs over a seething sea as a seven-metre cyclonic swell surged in, shattering a shipwreck below.
Sensationalist spin? No - Demelza tends to take a camera with her so she can capture and share the moment later; shipwrecks, sharks and all.
Demelza now lives in Perth, Western Australia, the shark attack capital of the world.
The Ocean's Gift series was her first foray into fiction, followed by the Nightmares trilogy.

Could you kill the man you love to protect your people?

Capsize his boat. Lure him into the water. Summon sharks...
How long will Sirena let Joe live, now he knows her secret?
A story about seduction and sharks, parenthood and penguins, with plenty of beer and boobs to keep it interesting, at some coral islands off the coast of Western Australia, plus a few other places, too.
Sexy mermaids surface once more, to sing up chaos on ship and submarine, sea and shore.
Trouble, take two. This is Demelza's second contemporary fantasy book in the Ocean's Gift series, with more mermaids and mayhem than ever.
You'll never look at mermaids the same way again.

A tiny taste of what's in store:

For the first time, she looked nervous. "No human has ever seen me change before," she admitted.
"It's the first time for me, too," I replied hoarsely.
She touched her heels together and gave a flick with her feet. The movement rippled up her body, before she did it again. It looked like her skin was darkening, or was it just the waves washing over her? Another flick, her feet rising out of the water this time, and I saw the blue wasn't just the water. It was like the skin of her legs had grown together, extending over her feet into curved flukes, as blue as the water. It blended seamlessly up her body, though her torso remained pale.
She turned on her side, her eyes curious. In the skin along her ribs, I saw dark lines that looked like gills. I couldn't take my eyes off her. She'd never looked less human, but I'd never wanted to touch her more. My mouth hung open and I couldn't seem to close it.
"Are you coming in, or not?" She twisted, arched and dived down.
I plunged into the water after her.

I dusted my hands off. I’d finished pushing all the furniture into place. I clicked a pen, writing a list of what I still needed to purchase and arrange for a life on land.
A new vehicle
Clothing and amusements for a child
A new computer
Waterproof camera
Alcohol
I looked down at my list and added another item:
Lightbulbs
Perishable food would wait until my return, for the journey to my home and then back to my land house was not a short one.
I dug out sufficient cash from storage and thought of taking Harley for one more ride before I slid beneath the sea surface in the dark of night.
The engine’s vibrations between my leather-clad thighs were irresistible. How can any man compare to the power of this? I thought as I roared to the car dealership to purchase something ladylike, shiny and blue.
When the day ended, my new little Mazda sat in the garage, her engine still warm. My sweet Harley was hidden behind the Holden, in the deep darkness at the top of the garage. I’d given him a little service before I’d covered him, lovingly cranking the spanner to make sure he was as tight as I wanted him to be. I felt a wrench that I could not ride him in my role as a responsible, human, suburban, single mother.
I’d already replaced the Edison light globe in the basement, watching it glow in satisfaction before I switched it off. I would call an electrician to add more lighting on my return.
All my new stainless steel appliances were packed into the cupboard beneath the silver hotplate, from the mixer to the pizza cooker. I even had a curved pizza knife tucked into the third drawer.
I sat in the kitchen and opened a chilled Stella. I raised it above my head. “In memory of death and duty,” I said quietly, sipping the beer with my eyes closed as my thoughts turned to more recent memories. Should I pick up my smartphone and call Skipper, to obtain the contact details of his sexy deckhand with the sweet arse? I shook my head with a smile. Not tonight. Perhaps one day…
I drained my drink and threw the empty into my new recycling bin. I looked out the window at the new playground and swing set, hoping they would meet with my youngest daughter’s approval when I brought her to land. We would have to drive by a playground full of human children so she would understand its use.
Marina…Just the thought of my youngest daughter had me yearning for home. I slipped out of my clothes, throwing them into the hamper beside the new washing machine. I padded across the dining room, snatching up the digital camera on my way to the folding doors that led outside. I closed and locked them behind me, hiding the key behind the mermaid tile on the wall.
I strode across the street and the park to the river in the darkness. I slipped over the side of the ferry terminal jetty and into the dark river water.


On my return, I will truly infiltrate the humans as never before, with my daughter by my side. May heaven help them, if I decide that I will not, I thought as I swam out to sea. Next landfall is at the Abrolhos, for a slight rest before I head home. If only it were the fishing season, when Skipper’s dreamy deckhand might appear on my decking again. Perhaps there is one man who can rival my Harley. I let my laughter bubble up to the surface as I swept through the water, increasing my speed.