"The Summer Triangle" -
Why is that our topic on this fall day?

It is a legitimate question…

The summer triangle is visible all night during the summer which gives the group its name.  Although it is no longer summer, the triangle is directly overhead at 8:00 these evenings which makes it an easy target for beginning stargazers. The triangle sets about 2 am.

To locate the summer triangle simply lie down outside on a flat surface with your feet to the south at 8:00 pm.  South is where the sun is at noon.  Your head will be to the north.  Look straight overhead; the three bright stars are unmistakable.  The base of the isosceles triangle and therefore the shortest of the three sides are to the north.  Stretch out your arm with hand against the sky and try, with your fingers, to span the distance between the two northern stars of the triangle. For most it cannot be done.  Your fingers won’t stretch out quite far enough.

The bright star to your left is Deneb.  It often marks the tail of the swan.  To the right is Vega usually drawn as part of the handle of the harp.  To the south is the bright star Altair, often depicted at the eagle’s neck.
The modern student can simply Google the three constellations, find their mythologies and there you have it. Zeus turned himself into a swan to seduce Leda.  The eagle is the bird that ate the liver of the rock chained Prometheus during the day.  At night the liver grew back so Aquila will feast the next day. This was the punishment of Prometheus for giving man the gift of fire. The harp is the instrument Orpheus played etc., etc., etc.

The above is the standard mainstream approach to stargazing.  To some of us it is highly unsatisfactory. The word “tri-angle” begs for three of the same.  It is called symmetry. There is an obvious celestial triangle but it is associated with a musical instrument and two birds.  The two birds, an eagle and swan are not known as songbirds so we cannot follow that route.  We can say these three constellations associated with a triangle are opaque. We cannot see past them.  To transform the constellations from opaque to transparent we must look elsewhere.

A good place to start is to realize the official 88 constellations we now recognize was the result of a 1930’s commission appointed by the International Astronomical Union. The commission’s task was to standardize the sky so an astronomer in Australia can identify a point in the heavens that would be understood by an astronomer in Garwood, New Jersey.  In addition every point in the sky will have to be part of a constellation.  As a result of this commission’s work we now see a Swan, Harp and Eagle among the stars of our summer triangle. 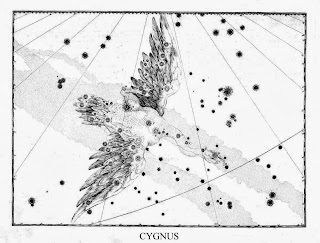 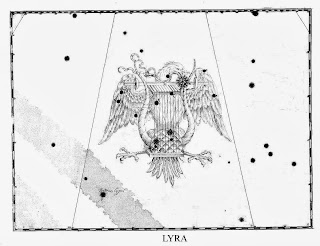 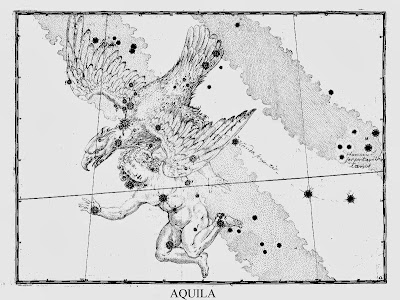 It was not always so. Here are three constellations of our summer triangle drawn by Johann Bayer in 1603.  His maps were at the beginning of centuries old mapmaking illustrating the constellations in elaborate artistic detail.  Note Bayer’s depiction of Lyra the harp.  Behind the harp we can see Bayer chooses to draw a vulture as well.  If we ignore the harp and use the vulture for these stars we can breathe a sigh of some relief.  We now have three birds for the summer triangle, a vulture, eagle and swan. But why these three birds and why are they associated with a triangle? It will not do to brush them off as simply images that do not have to make sense.  They are after all; mythical expressions and we all know myths are stories that are not true.

Here is a drawing of one of my favorite mythical figures.  Her name is Baba Yaga from Russian-eastern European folklore.   She and her two sisters each lives in a house deep in the forest.  The house is standing on chicken legs. She has two sisters who are also named Baba Yaga.  One sister is young, the other is an adult. The modern interpretations of Baba Yaga are centered on the third sister, the old crone depicted here.
Baba Yaga eats children.

A boy kid or a girl kid wanders through the forest and comes across the hut of Baba Yaga.  The kid yells out the witches’ name three times: “Baba Yaga, Baba Yaga, Baba Yaga!” The house turns toward the kid, the door opens and out steps the ugly witch.  She takes the kid by the hand, both go into her hut, and the child is never seen again. Note the forks decorating the peak of her house.
The story of Baba Yaga is not the first time we hear of an ugly which who eats children.  There is a more common story of Hansel and Gretel.

“We have no more food to give our two children, they must leave the house,” said the stepmother to the father.

“Oh no,” the father exclaimed. “The forest is very dangerous. They could be walking through the forest and attacked by a bear! The bear could tear them to pieces! They will call out to us for help, but we cannot hear their cries for help! We cannot help them!”

“That’s right, but we have no more food to give them so they must leave the house.”

“Don’t you realize what can happen if they leave the house?  They could be walking down the forest path and trip over a log.  They could be on the ground with broken legs in excruciating pain, calling out to us for help, but we cannot help!”

“That’s right,” the stepmother replied, “But we have no more food to give them so they must leave the house.”

We know the rest of the story.  The wandering children wind up in the witch’s house.  The witch is fattening up Hansel to get him up to grade then push him into the oven.

Something is missing from these stories.  If the child knows he or she will be eaten by Baba Yaga, then why do they call out the witch’s name? It is the child who initiates the encounter.

Do you want to know what happens when a child enters Baba Yaga’s hut? If the child is a boy, he is given instructions which last the traditional two nights and three days.  The instructions include the realization that before entering the hut, the child depended on society for food, clothing, and shelter.  After leaving the hut society will depend on him to provide food, clothing, and shelter.  A boy does not leave the hut, a man does.  The child no longer exists.

If a girl enters the hut of Baba Yaga she is given the same instruction with the added features of what it means to bring forth another human being in that culture.  In addition, she is told although the husband is in charge of the household; the mother is its soul.  A girl does not leave the hut of the witch, a woman leaves the hut. The child no longer exists.

When we realize the folklore the oven plays in some regions of Europe, we can have a different understanding of Hansel and Gretel.  The oven transforms food from inedible to edible. The place of the oven holds the same sacred place as the altar of a church. It is a sacred transforming place inside the home.  When the stepmother says: “We have no more food to give them…,” what she is saying is “We have taught our children all we can teach them, they must leave the house and seek their own way in life.”
The husband objects on the grounds that life is cruel in the forest.  He is saying in effect, he cannot let go, he wants his children to remain children and not face the world.  In this interpretation it is the husband who plays the heavy and not the stepmother.

The wicked witch in Hansel and Gretel is fattening Hansel to throw him into the oven.  That is to say she is giving him additional knowledge his parents could not provide to transform him (oven) into a man.
What about the bones in the back of the witch’s house in Hansel and Gretel?  The bones belong to those who entered the witch’s house but could not make the transition from child to adult.
What if a child is walking through the forest, sees the hut of Baba Yaga but responds: “I don’t believe in that nonsense…” and walks away. The child grows into an adult.  Nothing will stop that, but they retain the mind of a child.  In our culture gang members fit this condition.

We cannot help but notice the artist drew the upper half of our transformational Baba Yaga as a triangle.  The triangle or letter “V” is the symbol of the female.  How can we use this information to transform the constellations of the summer triangle from opaque to transparent?

If our culture were influenced more by Greek mythology we would be able to understand the Greek use of the swan.  To us, the water bird called a swan is our opaque water bird, the stork is transparent. Note how mentioning the stork conjures up the cartoon of Dumbo.  Who brings the baby elephant to the mother elephant but a stork?  We say the word “stork” speaks to us the way “swan” spoke to the Greeks.  These birds represent life giving.

The eagle is a bird of prey.  In order to survive it must kill.  So in our celestial triangle we have the symbol of life giving and life taking.

How does the vulture fit in? The vulture, unlike the eagle, does not kill to survive but instead eats things already dead.  Death provides life for this bird.

From our celestial triangle we have the symbols of life giving (swan), life taking (eagle) death and regeneration (vulture). It describes the motions of the sun, moon, stars and planets in the sky.  These astronomical objects appear to rise in the east, pass overhead, and set in the west only to rise again (regeneration). It represents the same journey we are all on of birth, life and death.  This is how we can transform the constellations of the summer triangle from opaque to transparent.  They are about us.

Posted by Kabrini Message at 8:00 AM No comments: Links to this post