Happy St. Patrick's Day everyone!  OK, so our blog today actually has nothing to do with the holiday (and try as I may, I could not think of a possible tie in), but didn't want to miss the opportunity to wish everyone the very best!  Now... 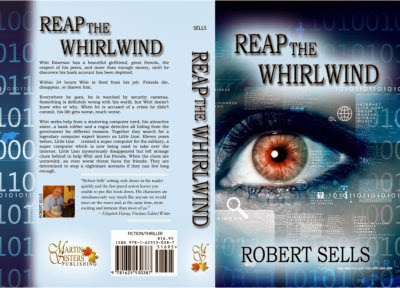 So excited to have Robert Sells and Reap the Whirlwind with us today!  I have a feeling it's a story Kabrini fans will relate to - ripe with conspiracies, cyber terror and other fun.  First let's learn a little about the author.  Oh...and did I mention the contest???  Don't forget to enter - the info. is at the end of the post.

I attended college at Ohio Wesleyan where I struggled with physics. Having made so many mistakes in college with physics, there weren't too many left to make and I did quite well at graduate school at Purdue. 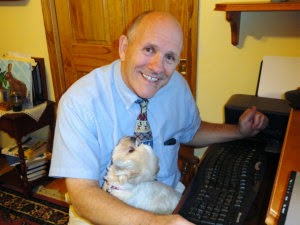 I worked for twenty years at Choate Rosemary Hall, an exclusive boarding school in the heart of Connecticut. More often than not, students arrived in limousines. There was a wooded area by the upper athletic fields where I would take my children for a walk. There, under a large oak tree, stories about the elves would be weaved into the surrounding forest.

Returning to my home town to help with a father struggling with Alzheimer’s, the only job open was at a prison. There I taught an entirely different clientele whose only interaction with limousines was stealing them. A year later Alfred State College hired me to teach physics. I happily taught there for over ten years.  A rural, low income high school needed a physics teacher and the superintendent, a friend, begged me to help out.  So, I am finishing my teaching career in a most fulfilling way… helping kids who would otherwise not have access to a qualified physics (and math) teacher.
My wife pestered me about putting to “pen” some of the stories which I had created for my children and kids. I started thinking about a young boy and a white deer, connected, yet apart. Ideas were shuffled together, characters created and the result was the Return of the White Deer. This book was published by the Martin Sisters.
Years ago I gave a lecture on evolution. What, I wondered, would be the next step? Right away I realized that silicon ‘life’ had considerable advantages over mortal man. Later this idea emerged as the exciting and disturbing story called Reap the Whirlwind, my most recent novel.

I have many other stories inside my mind, fermenting, patiently waiting for the pen to give them breath. Perhaps someday I will even write about those elves which still inhabit the woods in the heart of Connecticut.

Robert Sells has taught physics for over forty years, but he has been a storyteller for over half a century, entertaining children, grandchildren, and students.  He has written the award-winning novel, Return of the White Deer, historical fiction, and he has written Reap the Whirlwind, a thriller.  His third book, The Runner and the Robbery, a young adult book, will be published by December, 2013.
He lives with his wife, Dale, in the idyllic village of Geneseo, New York with two attentive dogs who are uncritical sounding boards for his new stories.  He is intrigued by poker and history, in love with Disney and writing, and amused by religion and politics.

Synopsis for Reap the Whirlwind

Whitman Emerson had everything a man could want: a beautiful girlfriend, a growing recognition in literary circles, the respect of his peers, and more than enough money. Until he discovers his bank account has been depleted. A few days later he loses his job. Old friends who may have been able to help him either die, disappear or disown him. Everywhere he goes, he is watched by security cameras. Then he is arrested for child pornography.

Bourbon bottle in hand, he trudged to the door and opened it to red blinking lights of half a dozen police cars. He was pushed aside as black-suited officers forced themselves past him. Roughly grabbed by one of the officers, Whit listened as a detective recited his Miranda rights. Within moments he was handcuffed and led outside.

On the run from the law, Whit joins up with a stuttering computer nerd, Rick, and his younger sister, Mary. The trio gradually put the puzzle pieces together and realize their lives and the lives of all humans have been subtly manipulated by a computer, a computer which controls all data… anywhere, from banks to hospitals to online games.

“Whatever is happening is coming from that military base, Whit. I’m sure of it.”
“So the military is behind this?” Whit asked .
Rick paused a moment, both hands wrapped around the coffee cup. “Maybe. But, I don’t think so. I think someone has remotely gained access to their main c-c-computer. The biggest, bad-assed computer in the world.”
“And he is using this giant computer to control parts of the internet.” Whit said.
“All the net. Everything. He’s greedy b-b-bastard.”

An old and unorthodox detective, Jimmy Northup, is assigned to find Whit Emerson. But, the more he digs into the case, the more he realizes it’s a set up.

Jimmy could hear cars pulling in, yells, and laughter. The light and the sound didn’t keep him from sleeping, though. He was unable to stop thinking about the fugitive. He pushed out assumptions until one by one, they dropped away, more tired than he was. He was left with only one assumption which held up: Whit didn't do any of the crimes. Someone was setting him up.

Jimmy offers his help to the ‘Trio of Terror’ and they search for a legendary computer expert, Little Lion who created a super computer ten years before. All four are shocked when they finally meet the legend.

Rick’s wide eyes blinked. “But… b-b-but, you’re a woman!”
She cast a look down at her body as though she was checking, just to make sure. “Correct. A woman, black, old, and unmarried.  She tilted the glasses down and glared at him, “You have a problem with any part of that?”
Rick quickly shook his head as though he was trying shake off her stare.
“Little Lion… the name… we were expecting a man.” Whit interjected.
“Oh, for heaven’s sakes, how do such chauvinistic notions prevail? It’s not the big male lion with his fancy mane who is the real food-gather… it’s the female… smaller… admittedly not as attractive… who makes the kill. The little lion in the pride.”

Little Lion confirms that the computer represents a grave threat to mankind. A threat that no one else is aware of. The computer created by Little Lion had achieved artificial intelligence and self-awareness. To ensure its survival, the time of Man must end.

As Little Lion wearily rose from the chair, the technician handed over a print out of complex machine language.
“This line is before you pushed the button. The lines which follow are after union. The first page is gibberish. But the second page shows a positive check of all systems. Congratulations. It works perfectly.”
Little Lion did not look at the results of the union. Instead she focused on the “gibberish”. Hiding any reaction, Little Lion was deeply scared.

So begins the greatest battle for freedom ever fought, a battle which only Whit and his friends would ever know about.

He abruptly stopped, pulled his hand from hers and looked at the homes nestled in tree-laden yards, a call for dinner in the distance, a laugh somewhere else.
“They have no clue, Mary. No one even suspects their lives are being manipulated by a self-serving computer. We have to do something. We have to!”

Unfortunately the ‘something’ was destroying the internet as that was the only way to ‘kill’ the computer.

“Over the last few years,” Laisa (Little Lion) began, “I have been perfecting a computer virus unlike any other. It is powerful enough to bring down the entire net in a matter of minutes. Without the vast computer web, the computer is powerless. Then and only then would we have a chance to destroy it.”
“Do it.” said Whit.
“Really, Whit? Are you ready to really take down the entire net? Sacrifice all financial institutions?”
“Hospitals, police links, GPS…” added Jimmy, emphasizing each with a note played on the piano.
“Satellites, airplanes would be impacted, perhaps even causing crashes…” offered Mary.
“Ships… our navy would be compromised,” continued Laisa.
“Agriculture would be d-d-damaged; they u- u-use computer programs for watering…”
“Pictures, genealogy, the stuff of families would be lost.” Mary said.
“The world would go into a financial and mental depression far worse than even the Great Depression.  Trillions of dollars lost. Trillions, Whit. Don’t worry about a stock market crash, the entire human civilization would crash. Wars would start up. Millions, perhaps even billions would die.”

Despite the devastating prospect, the group goes ahead with their intentions. But, they are up against the military, the police, and even the general public as the computer controls what each group ‘sees’ and ‘hears’.

Beside the computer, of course, the villain in the story is Henry Jackson, an upper echelon government official in charge of the manhunt trying to capture or, if necessary, kill Whit. Jackson is efficient and brutal, single-minded and focused, charming and self-serving.

When Alice came to his suite that evening, he offered her some wine. At first, she declined. Jackson wiggled the bottle a little, grinning as he tried to convince her. “Come on. You’re off the clock, honey. Just one glass.”
In observing the way Jackson handled subordinates, she knew this was not a man to say no to. He could and did make or break careers. Alice agreed to the wine.

The closing chapter finds Jackson converging on Whit and his friends as they finally mount an assault against the computer. They eventually succeed with their mission but not without collateral damage to the world and themselves.

REMINDER:  DO NOT FORGET TO ENTER THE CONTEST (BELOW)!  But first...

The Story behind Reap the Whirlwind and the Future of Man

One winner will receive a signed copy of Return of the White Deer (U.S. only)...AND...

One winner will receive a $10 Amazon Coupon International

The two winners will be announced at the end of the tour.

Thank you so much for joining us today, Robert.  Again, I'm sure Kabrini fans will enjoy Reap the Whirlwind - we love a good conspiracy theory.  So here is all the info. needed to start reading Reap the Whirlwind right now and to follow Robert and see what "fermenting" stories he "gives breath to" next!