I want to welcome this week's guest author, Steve Emmett! 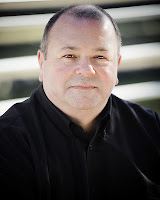 Steve Emmett is a British author, occasional book reviewer and creative writing tutor, and a member of the Society of Authors.

Born in Harrogate, the genteel spa town known as the place where Agatha Christie hid away from the world thirty-two years earlier. He studied at the Architectural Association School of Architecture in and built a few houses before going off the rails. For over twenty years he ran his own real estate agency specializing in Italian country homes and, for almost ten years, lived by Lake Trasimeno in Umbria, the setting for his horror debut, Diavolino. Born at the end of the 1950s, Steve grew up on Dennis Wheatley novels and Hammer Horror films, and on many occasions started to put pen to paper. Completely dissatisfied and unfulfilled with his career, Steve decided in 2008 that he wanted to write and began Diavolino. Right now he is completing three horror novels. Steve’s work is influenced by the writing of John Ajvide Lindqvist, Stephen King, M R James, Anne Rice and Joanne Harris (and one or two others), but he has his own distinctive style. Steve is an avid reader of horror and suspense, and works as an occasional reviewer for the New York Journal of Books.

And now...Steve, please tell us anything you'd like us to know about yourself and your writing.

I often get asked if I’ve always wanted to write. You know how some authors say they always knew, that even as children they would write stories and stick them in boxes under their beds? Well, I didn’t do that. I didn’t even read much in my early years. My father never read and one of his proudest boasts was that he’d only ever read one book in his life, so it’s hardly surprising that as a small child I had little exposure to books.

That all changed, of course, when I went to school. The funny thing is, I could read before I started school and I’ve been trying to remember how I learned. I think I taught myself because I have vague memories of sitting on the stairs at home with some books I’d been given by one of my aunts and my grandparents. So once in the classroom, my reading and writing took off.

But things didn’t change significantly at home to provide the kind of environment in which I could easily discover myself. My mother did read when she could, in other words when my father wasn’t around to criticise her for doing so, and that’s how I stumbled upon Dennis Wheatley’s The Irish Witch, but you have to imagine that I went to school by day, and by night had to listen to the mantra ‘education doesn’t matter’. It’s amazing that I went to university.


There is one event from schooldays that sticks in my mind. Do you know the poem Death in by Sir John Betjeman? Here it is:

Beside her the lonely crochet
Lay patiently and unstirred,
But the fingers that would have work'd it
Were dead as the spoken word.

And Nurse came in with the tea-things
Breast high 'mid the stands and chairs-
But Nurse was alone with her own little soul,
And the things were alone with theirs.

She bolted the big round window,
She let the blinds unroll,
She set a match to the mantle,
She covered the fire with coal.

And "Tea!" she said in a tiny voice
"Wake up! It's nearly five"
Oh! Chintzy, chintzy cheeriness,
Half dead and half alive.

Nurse looked at the silent bedstead,
At the gray, decaying face,
As the calm of a Leamington ev'ning
Drifted into the place.


She moved the table of bottles
Away from the bed to the wall;
And tiptoeing gently over the stairs
Turned down the gas in the hall.


I can hear our English teacher at King James’s now taking a deep breath, looking at us over the pages of the book and asking, “What do you think that tells us?” My hand shot up. “That the nurse gassed her,” I said.


If only I had seized that moment I suppose I might have had the courage to become a writer instead of allowing myself to be railroaded down the wrong path. I’m talking of the 1970s here and like so many of my friends I got channelled into a career based on bricks and mortar. When I look back on it, I cannot think of much that could have been less suitable for me.

But here we are. No point crying over spilled milk, as they say, and the one thing that I did gain from my previous career is varied experience. Of course, looking back, I would have loved to have been a writer in my twenties – but what the hell would I have written about? Now I have a whole lifetime (well, half a lifetime or thereabouts, I hope) behind me, rich with events and characters that I can draw on to create my weird stories. In Diavolino I used Italy and things that happened to me when I lived there to build a Gothic horror, contrasting the beauty of the place with evil. I have just completed a vampire novel which draws on my
knowledge of ancient and modern Rome. And I’m currently working on what might be a psycho-sexual novel that examines aspects of the human condition few are willing to acknowledge. I’m actually writing this one with another author and dear friend, Julia Kavan; neither of us writes fast so maybe it’ll be a case of many hands make light work of dark words! All my stories have something to say about the society we live in and feature, in one way or another, people I have met over the years.

The other obvious question, then, is how did I make this massive change from real estate agent of twenty-five years to published author? You know, the real answer is that I had it forced upon me. In 2008 I had already grown tired of my work and had returned to reading horror fiction in a big way. I knew I wanted to do it, to take that big step, but it’s one thing saying that and another walking away from a business that has supported you for over two decades. Lehman Bros made the decision for me, because when they went down so our business ground to a halt. I could have waited, bided my time as I had done in previous downturns, but I didn’t want to. It was my chance and I took it.

The first thing I did was to research what writing courses were available. I finally settled on a novel writing course run by the London School of Journalists which I could complete online (being still in Italy with lots of paperwork to be done this was important). That really set me up, and by the time I’d completed the course, Diavolino had been born. It took me another couple of years to complete the book to my satisfaction and I felt elated when, amongst the various rejections, I got an acceptance from Etopia Press.

That all seems a long time ago. I’m now comfortable being a writer and it no longer requires gritting my teeth to tell someone what I do when they ask. I love my work, even though it is the hardest thing I have ever done. I’ve made some terrific new friends to whom I owe a great deal for the way in which my writing has developed. The main thing is that I am now proud of what I do, and that is a new experience to add to all the old ones. Experience, like education, is our future; we just need to learn.


Thank you so much for joining us here today, Steve!

Here is a short excerpt from Diavolino (it sounds wonderful!):

There was no heat wave in Clavelli’s apartment. The fire raged in the hearth as it always had. The renewal had improved his inner strength. He could pass among the hordes in the Basilica and the labyrinthine corridors without drawing too much attention to himself. To them he was just another decrepit old cleric living out his final days in comfort. He enjoyed watching them. They came from all over the world, attracted to the place like flies to shit. Soon he would destroy them all.
He went out onto the small balcony, impervious to the suffocating temperature. He could sense that she was near. How many centuries had he waited? Now, at last, he would be able to delight his Master. He would have his reward.
He inhaled deeply. Not for his senses the choking diesel of the taxis and the two-stroke scooters, not the wafts of cooking smells from the seedy restaurants where the insects gorged themselves, not the stink of sweat from the unwashed masses below, their armpits wet and rank with the heat. No, among all this he found it; the smell was unmistakable. Faint, undeniably female, a scent that reeked of sexual desires that could snuff out life with the twinkle of an eye that had at its very core the power to create doubt and blunt the sharpest intellect.
He raised his eyes to the stars. The sky was deepest purple with a film of haze drawn across like chiffon. He was aware of the blackness lurking around the fringes. He knew, yet it was as imperceptible as a leopard inching upon its prey. It would be no easy task to accomplish—but he had no choice. The chance had not come to all. He had been chosen.

Diavolino is available as an eBook or paperback from major retailers including:
Amazon.com
Amazon.co.uk
Barnes and Noble
The Hive

There are signed copies available directly from Steve via his website (lots of reviews, interviews, other buy links and posts too!):
http://steve-emmett.com/