With some timely information regarding the night sky TOMORROW NIGHT!

If at 10:30 p.m.your southeastern sky is clear the night of Saturday, May 21st you can see a curious meeting of four objects forming a square close to the horizon.  Figure 01 illustrates the view.

The four objects are the Moon, Mars, Saturn and the bright star Antares. The field of view in Fig. 01 is sufficiently large to include the South and East cardinal point designations, this to signify the scale of the quadrangle. 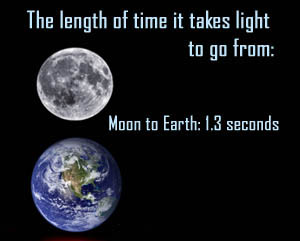 The moon is the brightest object of the four; the brightest because it is near. The moon reflects only 7% of the sunlight that strikes its surface.  It is really a poor reflector.  The Earth reflects 30%, Mars 29%, and Saturn 47%. The Moon, a quarter the size of the Earth, is but a quarter million miles from the Earth.  That is, a beam of sunlight reflected off the moon’s surface will take but 1.3 seconds to reach your eye.

One month out of 24, Mars, half the size of the Earth, is opposite the sun in our sky and is said to be “in opposition.”  In the present cycle, Mars will be in exact opposition May 22nd, just one day after this night’s observation. As you view Mars, the light that strikes your eye left Mars 4.25 minutes ago.

Saturn is the sixth planet from the Sun.  Nine and a half earths would have to be lined up to equal the diameter of Saturn. The light from the planet Saturn takes 1.25 hours to reach the Earth.

Note where Saturn is on May 21st.  Come back 29.6 years later. During that time Saturn would have appeared in front of each 12 zodiacal constellations. In 29.6 years it will be back in the same position you see it on May 21st. Where will you be 30 years from now? 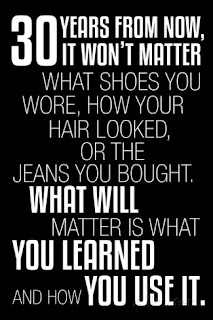 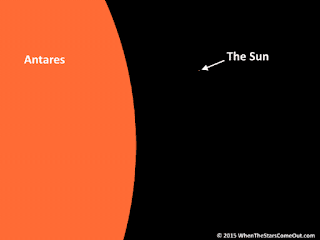 Mars looks like a red star, Antares is a red star. It is one of the largest stars visible to the naked eye. If Antares were the size of a baseball, our nearly one million mile diameter Sun would be scaled to smaller than the period at the end of this sentence.  Antares “surface” temperature is about 5,700 degrees.  The Sun’s surface temperature is 10,000 degrees.  How can Antares be so bright at a distance of 600 light years and so cool? Place Antares where the Sun is and the planets Mercury, Venus, Earth and Mars would orbit inside the star.  There are many square miles of surface area on Antares pumping out the red light. Antares is in fact 11,000 times brighter than the sun.

The word “Antares,” comes from the Greek.  It translates as: “the enemy of Mars.” Ares was the Greek word for Mars, while the prefix “An” can loosely be translated as “Anti.”  The idea was every two years Mars and Antares ride the sky together. The tension was… “which of the two will be the brighter red?”  You can judge for yourself who wins this time.  Or, to be honest, you can wait a few nights when the bright Moon’s light is no longer part of the picture.

Thanks Dan!  I, for one, will be sure to check all of this out tomorrow night and I'm sure all of our Kabrini Message astronomy buffs (and there are many!) will, too.

Abraham and The Kabrini - Similar or one and the same? Part 4 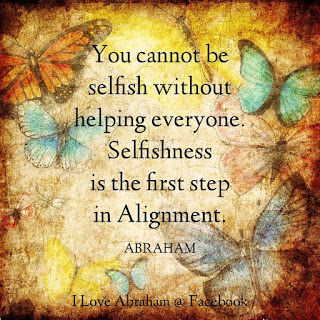 Welcome to Part 4 as we continue and conclude (for now) our series on the wisdom of Abraham, as translated by Esther Hicks in the teachings known as Abraham-Hicks.

Today we will cover:

In the meantime, if you've missed any previous posts, you can get caught up now by clicking: 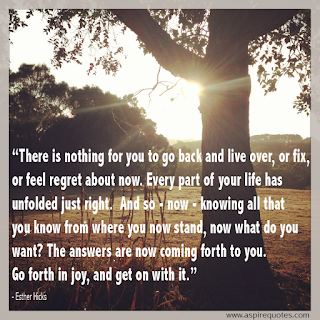 Once you're caught up, see how much you've learned and test your Abraham knowledge by taking: 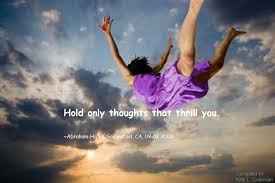 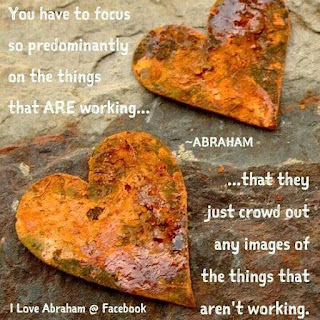 And now:  "The Grid" explained...It's always filling in!

Your grid is your Point of Attraction and starts to fill in with: 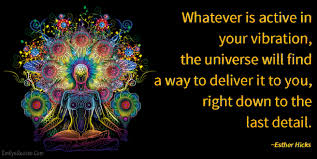 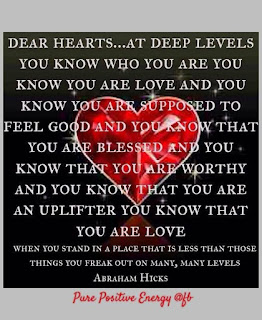 Rampages are high energy affirmations on a variety of subjects.  Here are just a few. 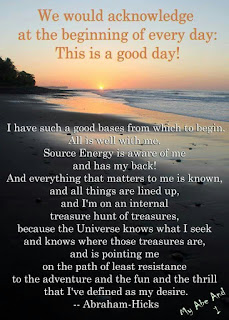 "This Is A Really Good Day!" Rampage: 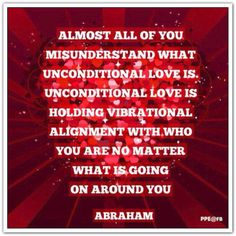 OK, so you say you just can't get enough of these Rampages?  Search more on YouTube or, here is a link to some favorites compiled all in one place on The Joy of Alignment Blog. 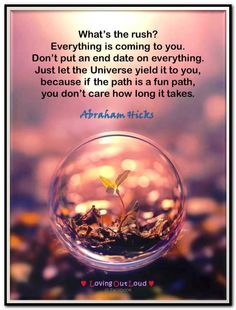 Thank you for joining us on all four parts of this series and I hope you've reached your own determination as to whether or not Abraham and The Kabrini are one and the same...I have!

This has been such a fun and challenging project, but exhausting!  In fact, one could say (wait for it...), if you were standing in my physical shoes, you'd be tired too.  Ha!  Just a little Abraham humor to end with.  If you've really been into this, you got that.  I almost went with an even worse one (believe it or not) about being "half transitioned into non-physical".  Half dead, get it?  OK, that's it, I promise.

After this, I'm going back to interviewing authors and having Professor Dan do astronomy posts - so much easier!


But one more Rampage - my favorite one of all!

A GREAT one to listen to, as I have many times, first thing in the morning

We saved the best 'til last!

"Things Are Always Working Out For Me!" Rampage:


We conclude this series... for now... with, once again, the quote Abraham ends most sessions and Rampages with:

Abraham and The Kabrini - Similar or one and the same? PART 3 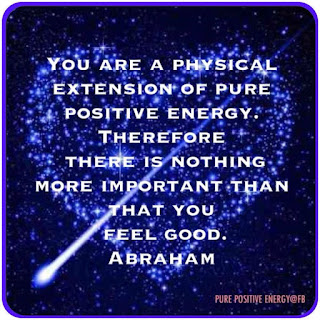 Welcome to Part 3 as we continue our 4 part series on the wisdom of Abraham, as translated by Esther Hicks in the teachings known as Abraham-Hicks.

Today we will cover:

In the meantime, if you've missed any previous posts, you can get caught up now by clicking:

Here for Part 1 and


Once you've completed Parts 1 and 2, see how much you've learned and test your Abraham knowledge by taking:

ANSWERS FOR QUIZ - PART 1 and 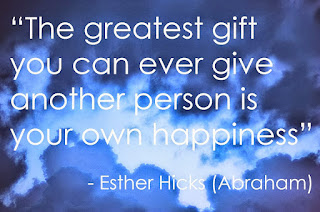 First up...check out the video below and the summary that follows.  These are the 5 steps of the entire philosophy of Abraham - so very important!


Summary as defined by Steps 1 through 5: 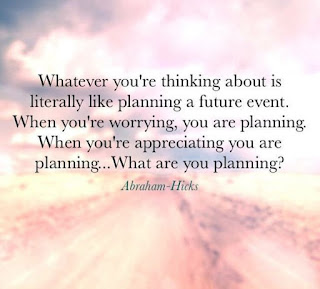 Step 1:  Contrast causes you to ask.
Knowing what you don't want helps you to know what you do want.

So contrasts (formerly known as "problems") are not bad, as they cause your preferences to become clearer of what you do want.

So ask.  But ask only once and then  move on. Don't dwell on it, as continual asking for the same thing is "beating the drum of not having", which will become your reality. 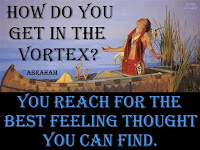 Step 2:  Source immediately answers by putting the cooperative components into your vortex.  You need not do anything in Step 2 - this is done automatically by Source (yeah!) Note:  Refer to the Rampage video "It's Done!", below. 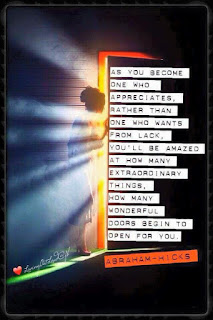 Step 3:  Get into the receptive mode; allowing yourself to receive.


Feel good in appreciation for what is and anticipation of what is to come. 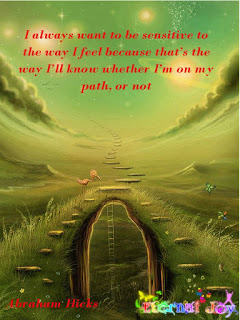 Step 4:  You own that.  You've got this!  You've practiced it and you're there mostly. 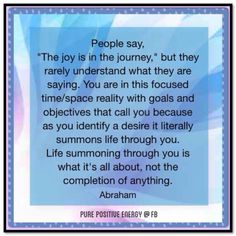 Step 5:  You're now willing to stop beating up on yourself when you return to Step 1.  You've mastered this and realize that repeating Step 1 - more problems (contrasts) lead to asking more questions, leading to more solutions - is not a mistake to be corrected.  It's the natural, necessary, on-going process of life.  It never ends while we are still alive (in physical form), nor is it supposed to!

Next we have "The Focus Wheel".  There are two short videos here - one by Abraham (via Esther Hicks) and the second one I found on-line by Arvind Singh that's a really good, detailed explanation on "how to".  In between there are some notes I made to help explain and summarize the process and THEN...(drum roll please)...my Super Yorkie, Ralphie did his very own Focus Wheel and has generously agreed to share it with us!  You are in for a treat!  But first: 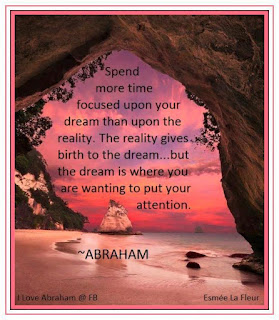 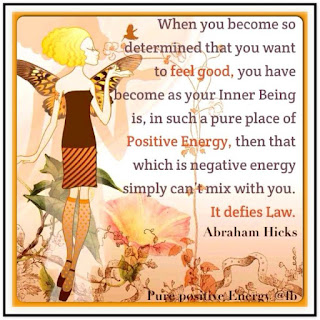 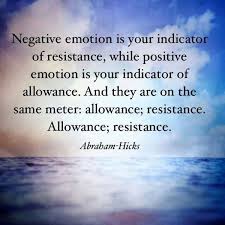 Suggestion 1:  You may not want to write your main goal in the center section of the wheel until after you've assembled several statements around it first.

Suggestion 2:  You may want to draw your own wheel, not  writing the main goal in the center section nor adding "spokes" (drawing in the lines) until after you've assembled several or all of the corresponding statements around the perimeter and, at that point, read around the wheel and draw in the lines (spokes) at which time the perfect goal statement for the center of the wheel will come to you.

However, if you do want a printable Focus Wheel, click here.

Here is another video (it's short, I promise!) with detailed, specific instructions...and don't worry, Ralphie is up right after this:

And now, as promised last week, an actual Focus Wheel presented in a "new and creative way"...my dog Ralphie was kind enough to share a Focus Wheel he did on chasing squirrels: 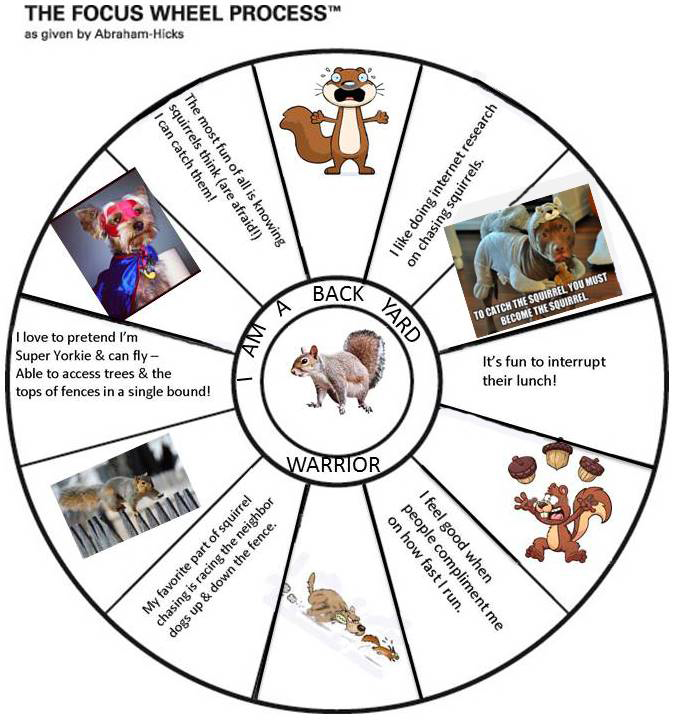 OK, that was a little silly, but it demonstrates the process (hopefully) making it a little easier to understand and helping us realize this should be fun!


Here is another, more serious example I found on-line (I like Ralphie's much better though!): 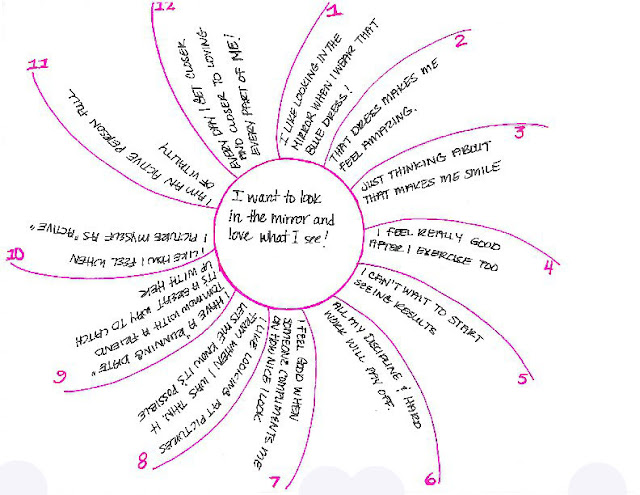 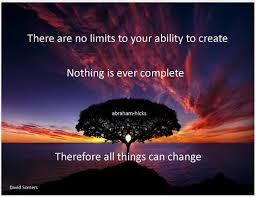 When I first planned to do "a post" on Abraham, I actually thought it would be just one post.  I quickly realized I'd need at least two, which turned into three, which I now realize will be a total of 4!  So Part 4 of what has turned into a series continues next Monday, May 9th.  That 4th and final (I think...for now...ha!) post will cover:

In the meantime, we will, once again, conclude with the quote Abraham ends most sessions and Rampages with: