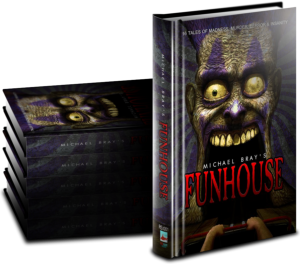 So happy to WELCOME BACK Author Michael Bray today and hear all bout his latest endeavor into the realm of horror!  It's a frightfully fun anthology called (appropriately enough) Funhouse.


Here is some info. on Michael and Funhouse and then we will have an excerpt from one story as well as a full short story on another (very generous of Michael)! 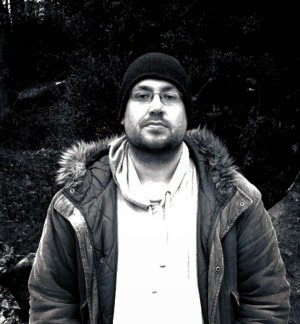 Michael Bray is a Horror author based in Leeds, England. Influenced from an early age by the suspense horror of authors such as Stephen King, and the trashy pulp TV shows like Tales From The Crypt & The Twilight Zone, he started to work on his own fiction, and spent many years developing his style. In May 2012, he signed a deal with the highly reputable Dark Hall Press to print and distribute his collection of interlinked short stories titled Dark Corners, which was released in September 2012. His second release was a Novella titled MEAT which was initially self-published before being picked up by J. Ellington Ashton Press. His first full length novel, a supernatural horror titled Whisper was initially self-published, and following great critical acclaim, sold to Horrific Tales publishing where it went on to reach as high as #3 in the amazon paid best sellers list. 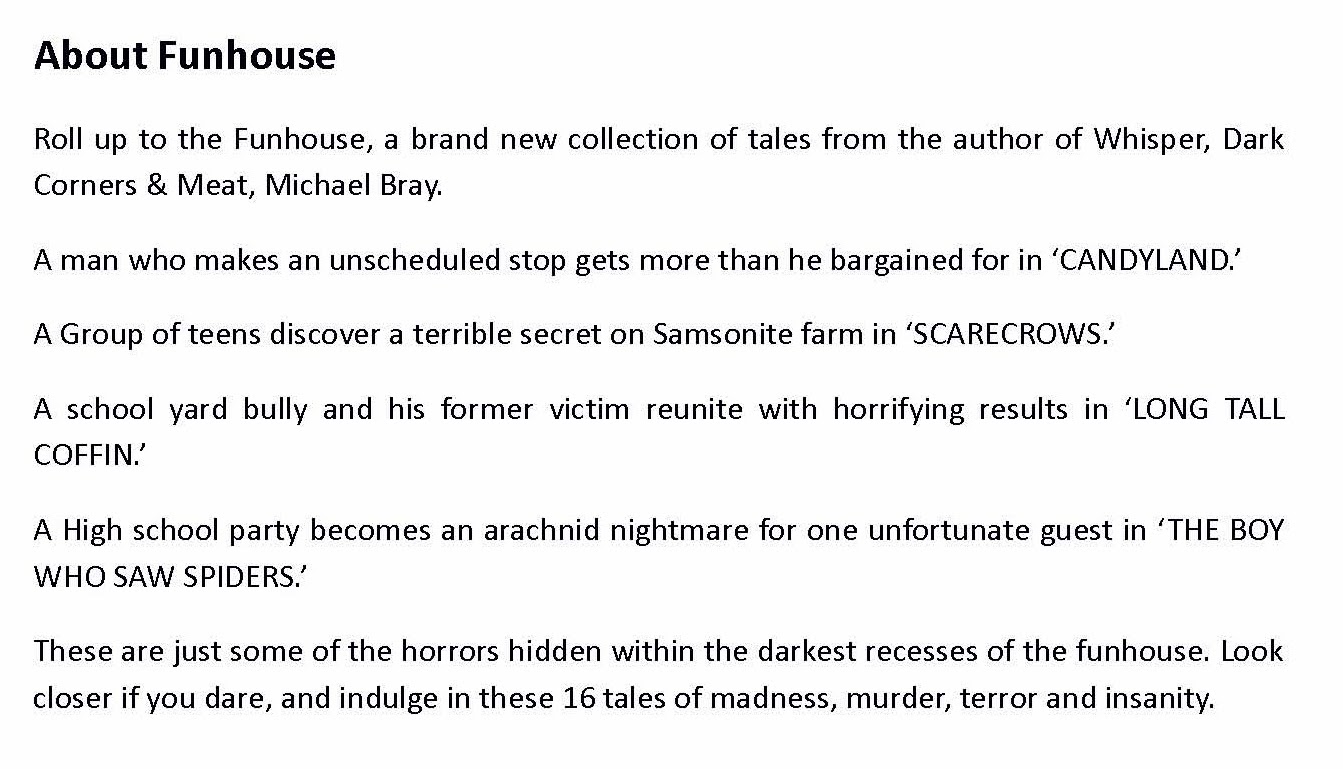 “So, what ya think of Candyland?” Clayton asked.


“It’s different to what I’m used to.”
“You from the city?”
“Yeah. L.A.”
“We manage to avoid all the troubles of the wider world here in Candyland. Nobody really notices us out 'ere on our slice of the world.”
“You must have some kind of trade though, right?”
Clayton glared, and again, Norton saw that little flicker of pure rage bubbling beneath the surface.
“Actually, ma family have worked 'ard to make sure Candyland remains entirely self-sufficient. We look after our own, and are quite happy for the world to go on without knowing we exist.”
Nobody knows I’m here.
It was the first time such a thought had entered Norton’s head, and the reason for it was simple.
Clayton Candy scared him.
As a physical presence, he wasn’t in the least bit intimidated, but there was something about him that was making the hairs on the back of Norton’s neck stand up as they picked their way through the crowd. He no longer wanted to speak to Clayton, and with Christine’s words still fresh, he turned to Herb.
“Mind if I ask what happened?”
Herb opened his mouth, but before he could speak, Clayton interjected.
“Ol' Herb 'ere had a nasty fall around twenty years back. Broke his spine in three places.”
Norton looked at Clayton, searching his face for any hint of a lie.
“Can't Herb speak for himself?”
“Oh he can, but he doesn’t like to say much these days. Do ya Herb?”
“No, Mr Candy sir.” Herb said, looking at Norton with such desperation, that he decided not to push the subject.
The trio walked back past the barbecue, which despite everything still smelled as good as ever. Norton could see the blue paintwork of the caddy, glittering in the sunlight, and his mood lifted at the thought of leaving such a backwards little town behind.
“Oh my…”
Norton’s Cadillac was exactly where he had left it, except now it was without wheels. They had all been removed, and the car was propped up on bricks.
“God damn it! God damn kids!” Clayton raged, looking into the throng of people at the fete.
“Messin’ with our guests like this, wait till I get my hands on the little bastards…”
For all of Clayton’s flapping and making a show of his dissatisfaction, Norton was more interested in Herb’s reaction.
Unlike Clayton, he didn’t seem in the least bit surprised.
For the next few hours, Clayton made a song and dance about trying to find out who had removed Norton’s wheels. He stalked around the fete, asking questions, and demanding answers. Norton was certain that the entire performance was for his benefit. He leaned against his car, watching Clayton stalk around the fete, and keeping a watchful eye on the sun as it started to get lower in the sky.
“Mr Norton?”
He looked at Herb.
“Yeah?”
At first, he didn’t respond. He simply sat in his wheelchair, chewing at his filthy, overgrown thumbnail. Just when Norton thought that he had only imagined Herb speak, the old man looked at him, his eyes wide and frightened.
“This is how it always goes.”
“How what goes?”
“'Ere in Candyland. It always works like this.”
“What is it Herb? Tell me what to do and I can help you.”
The old man smiled without humour and shook his head.
“Ain’t nobody 'ere who can help you, me or anyone else.”
“As soon as I get back on the road, I’ll come back. I’ll bring help.”
“You don’t get it do ya son?” Herb said as he held Norton’s gaze. “You ain’t never getting outta Candyland now.”

THE BOY WHO SAW SPIDERS

Someone shouting for help.

Someone quite close to him, crying.

He thought it might have been Jenny, and hoped that it was, because that would mean he had saved her. He would have looked for himself, but he had already torn out his own eyes.
He continued to laugh as the sound of police sirens drew close.

Thanks so much for joining us today, Michael.  All the very best of luck to you and please join us again soon.

In the meantime, here are links to purchase Funhouse and follow Michael Bray's latest exploits?