The Great Goddess and the Constellation Orion

With the absence of the evening moon, we can address an interesting aspect of these evening skies. 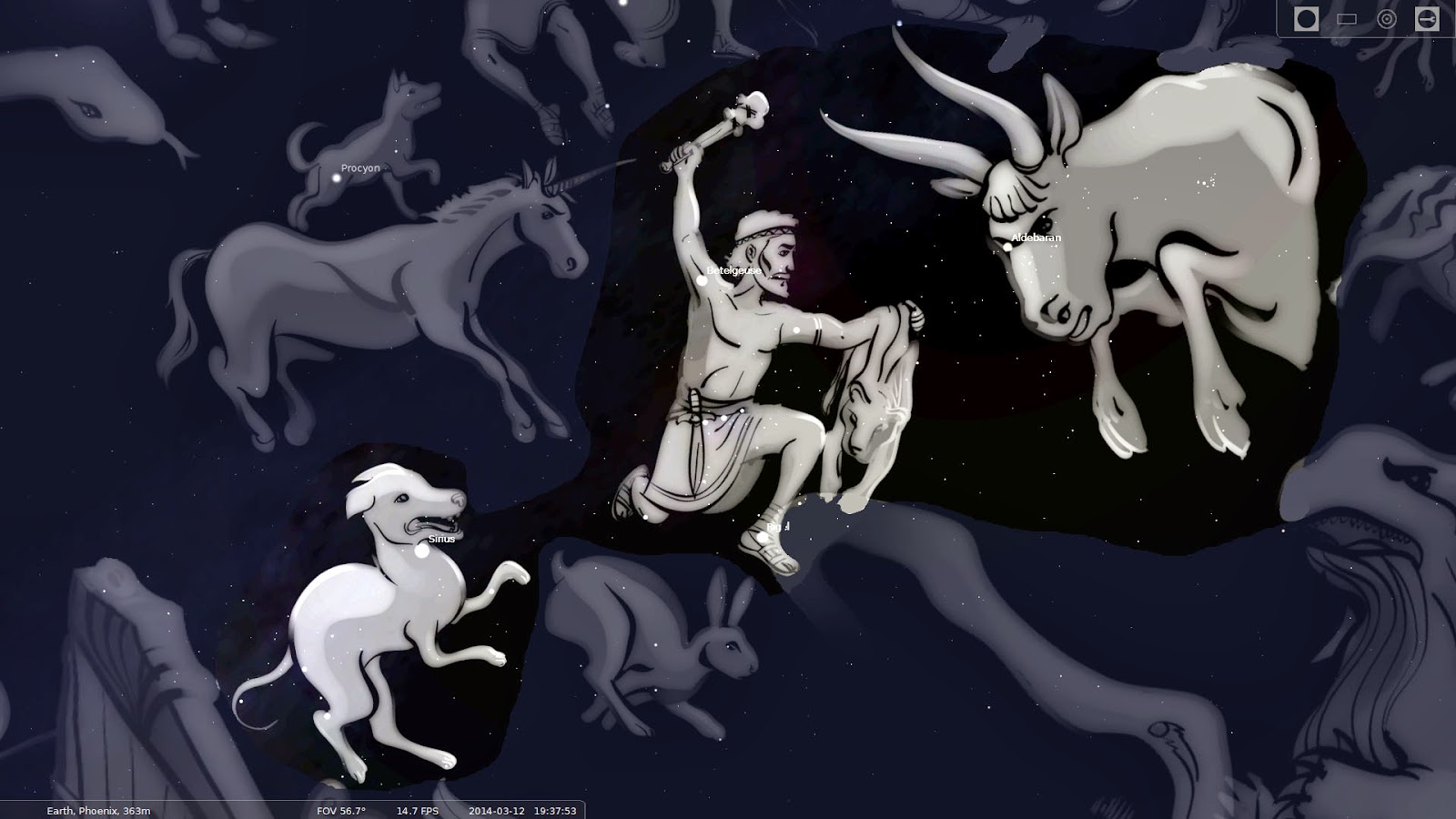 In addition, consider the constellated scene composed of Orion the Hunter, Taurus the bull, and Canes Major, the large hunting dog of Orion.  Is there a more dramatic stage of constellations?

There is Orion with his unbreakable bronze club poised high over his head.  A shield of lion skin is all that separates him from Taurus.  The charging bull with head lowered and horns locked into position is but a second or two from putting an end to our giant hunter.  Can you imagine the ensuing battle of cosmic proportions?!  What fertile ground wheeling nightly over our heads for Greek storytellers, playwrights, and authors of epic poetry! 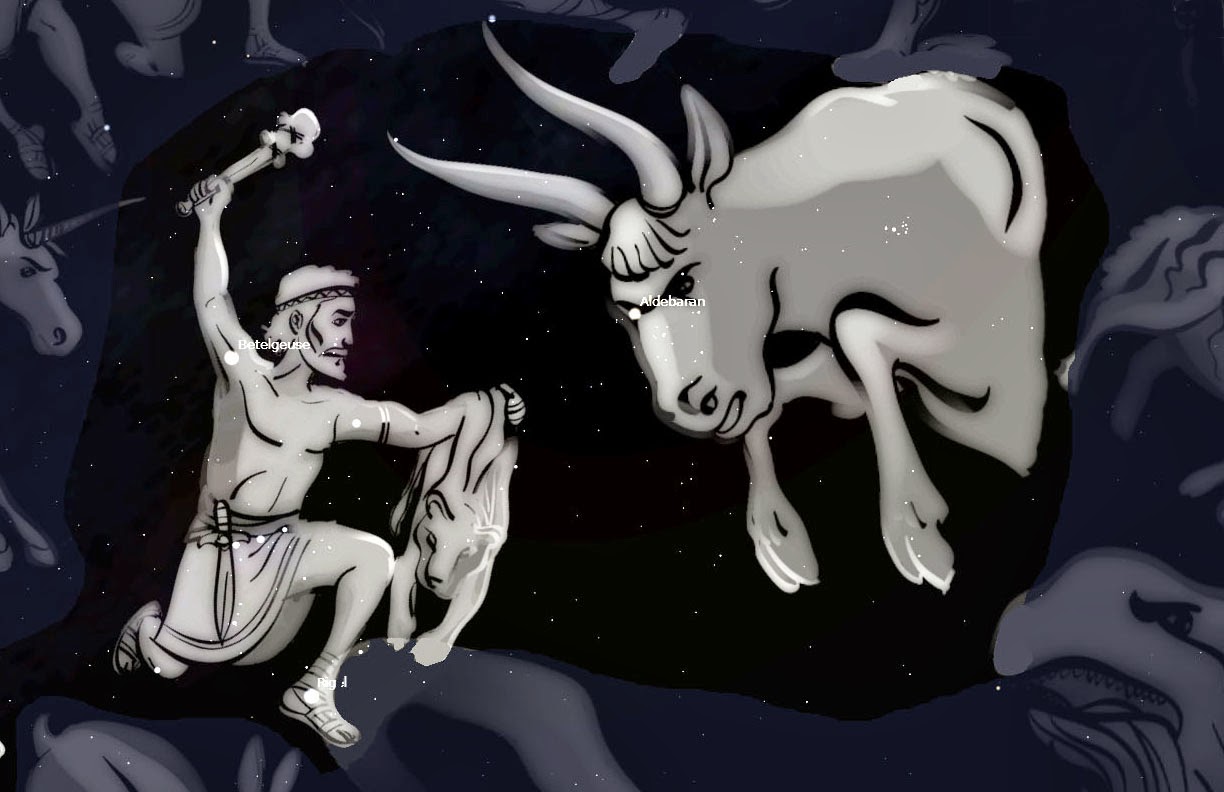 Actually you will have to use your imagination.  There are no stories, songs or poetry to come down to us from classic Greece that describes Orion in a bull fight.  It is certainly possible these items were simply lost to us.  "Lost to antiquity," was a popular phrase used in texts a century ago; though we do have another who brandishes a club and lion skin.  The constellation Hercules is a late Spring constellation made of dim stars.  We do have stories of how Hercules obtained his club, how the first of his twelve labors was to slay the Nemean lion whose skin according to some, he wears and is just short of covering Hercules's derriere. 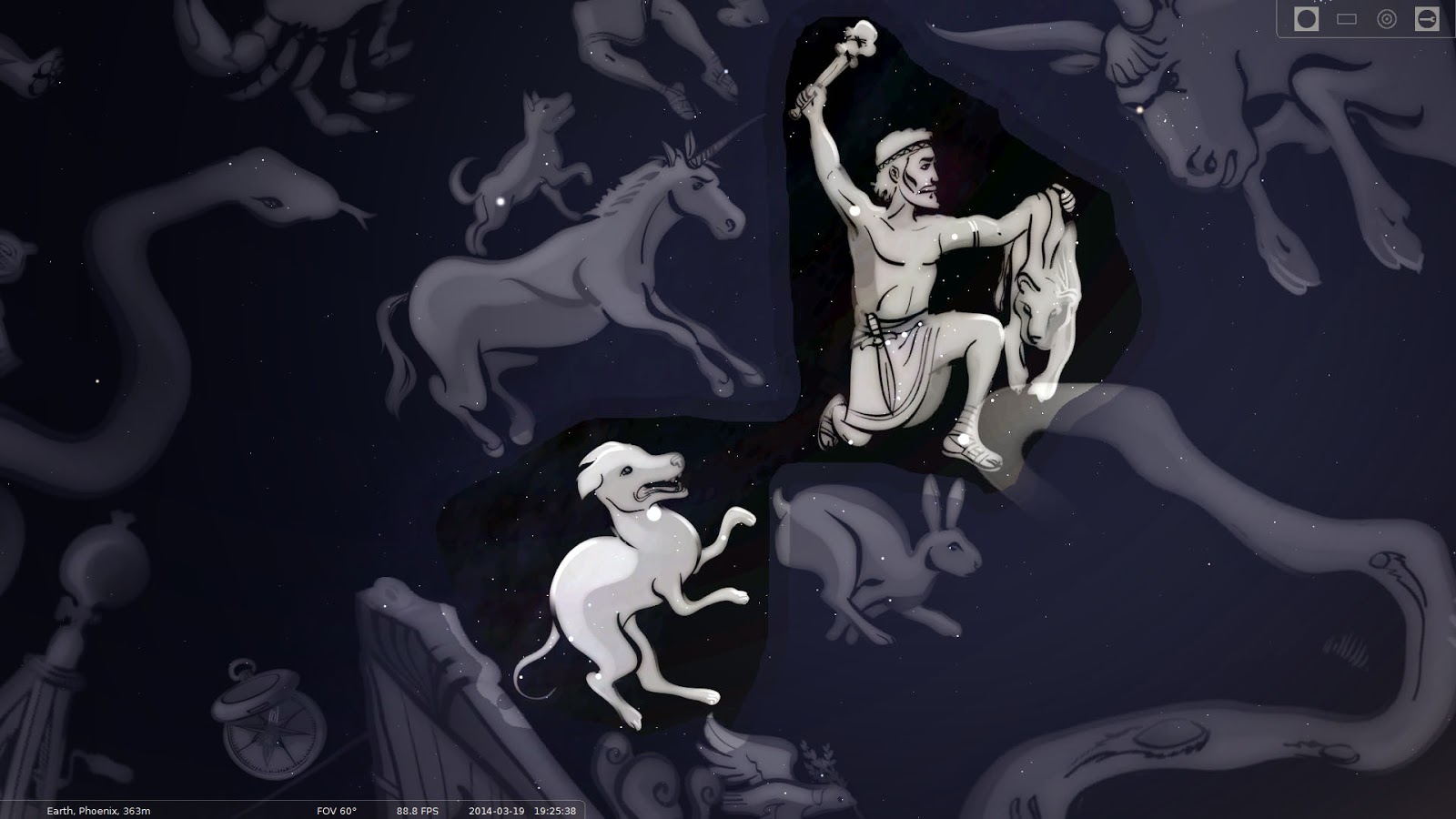 Surely we can speak of legends of Orion and his trusty dog Canis Major.  Of the hunt Orion and Artemis shared, Canis Major must have been instrumental in the basic feature of tracking and cornering wild animals as part of his hunting dog duties.  In my half-century of reading Greek and Roman mythology all that I have been able to come up with regards Orion and his dog:  "Orion has a stick.  He throws it into the sky.  The dog grabs it and buries it.  That is where the first grapevine grows in Greece."  Where is even the merest dimension a hunting dog this animal is supposed to supply?  Lassie was more active every Sunday evening.

Here are the three boasts of Orion:

1. He is so tall he can wade across the Aegean Sea.
2. He is such a great hunter he can kill every living thing on Earth.
3. He is so strong he can tear out an Ash tree with his bare hands and carry it down  the mountain. 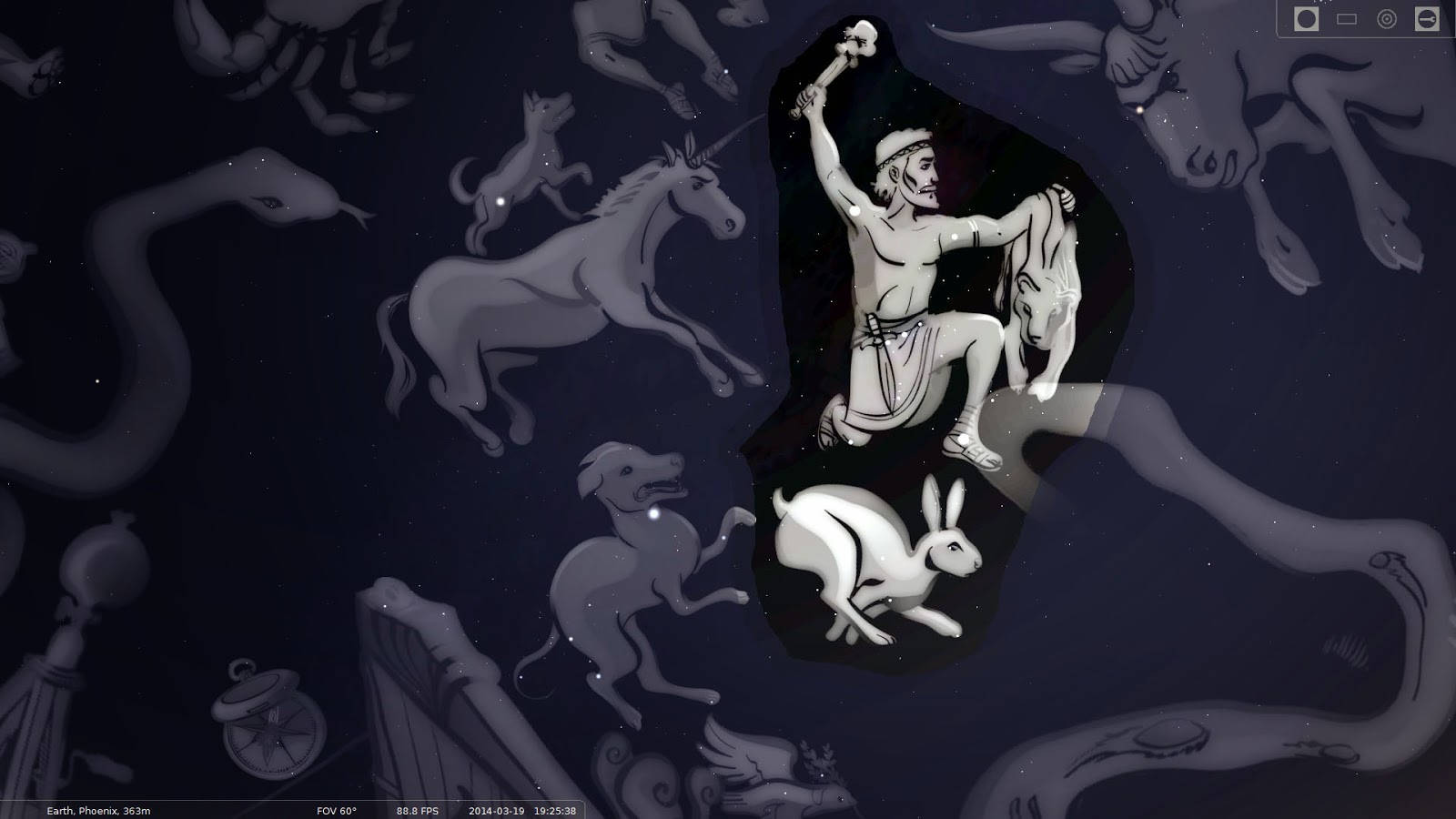 Quite an impressive list for our giant hunter.  Unless you begin to address the constellation at the giant hunter's feet.  It is Lepus, the rabbit or hare.  Why would a giant of this magnitude be content with the timid rabbit at his feet?  Planetarium lecturers, authors of constellation books and others who have a difficult time understanding metaphor have no trouble with this pair. "Of course there is a rabbit at the feet of the hunter... the hunter must have something to hunt and so there is the rabbit."  We have no Greek plays, songs, or epic poetry where Orion fights a rabbit.
The mythology we do have of Orion appears to be bits and pieces of other stories that have been spliced together to form what we call the mythology of Orion.  They do not form a coherent story of the life of Orion. In their popular 630 page text used in university mythology classes Mark Morford and Robert Lenardon devote 19 lines to Orion.  Less than a half-page, with no mention of a bull, dog or rabbit.  It is as though the constellated Orion and the mythology of Orion have less in common than what we learned in grade school, planetaria and books about constellations.

Here is a list of constellations around Orion known to the classic Greeks.  Beginning from the north and moving clockwise we have:


Let's change the list to nine items of a charioteer, a mother goat and three kids, a bull, a river, rabbit, large dog, small dog, twins.  With the items disassociated from the constellated world, ask anyone who understands Greek mythology:  "What do these nine items have in common?"

If they really do understand Greek mythology, it should take something in the order of a second or two to respond: "Simple... these are all symbols of the goddess Artemis."

It will take several more submissions to explain how Artemis is a better fit for the stars of Orion and surrounding Greek constellations.

Posted by Kabrini Message at 6:31 PM