The evening of June 30 is our fourth and last conjunction of the planets in the evening sky.

Tuesday evening, June 30th, Venus is in conjunction with the planet Jupiter. Look for two brilliant star-like objects in the western sky at about 8:00p.m. Venus will be the brighter of the two. 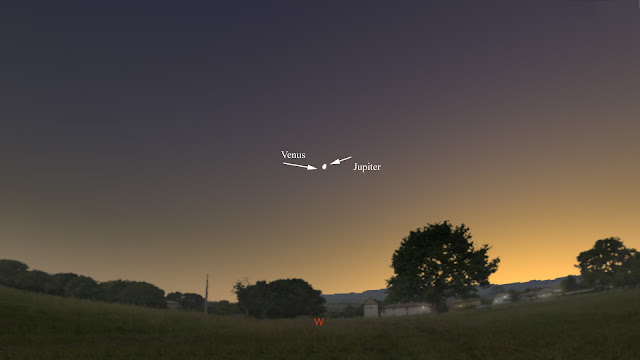 The pairing of these two planets in the evening sky will be so close, with only 1/3 of a degree separating them. As we discussed previously, the full moon appears about half a degree in diameter to our unaided eyes, so these two planets will be closer than the distance of the full moon. Without difficulty, you should be able to stretch out your arm and cover both planets with your thumb!

This paring, as with all of our observations on this topic, is an optical illusion.  Venus and Jupiter appear close to one another from our backyards due to line of sight perspective. Venus is 49 million miles away this evening while Jupiter is 563 million miles away.  Another way of illustrating the distances is to use the speed of light instead of miles. Light can travel around the earth eight times in one second. The light that strikes your eye from the planet Venus this evening takes 4.4 minutes to travel to your eye and the light from Jupiter takes 50 minutes to reach your eye.

There is one difference with the June 30 apparition from the three others reported on. With the exception of the moon, when Venus was paired with another planet, Venus would pass the planet then move higher in the sky each evening.  This evening is different.  Watch what happens evenings after Tuesday evening.  Venus and Jupiter simply separate from each other in an east-west direction, not above and below.  This is due to the fact Venus attained it's greatest apparent distance from the Sun June 6th.  Now the planet does not appear to move further from the sun, but closer.

The result is the two planets will ride the skies together for a few nights.  August 14-15 Venus will move just south of the Sun and will be lost in the solar glare.