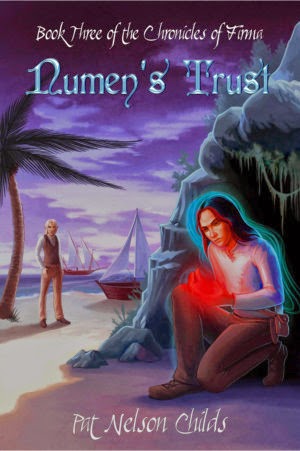 Pat Nelson Childs currently lives in Maine with his faithful cat, Bo. He was born and raised in Rumford, ME. In previous lives, he owned a clothing store in Provincetown, MA and worked as a computer support technician for a large international corporation based in Ann Arbor. He presently mentors GLBT youth and is at work on his latest book. When he's not writing (which is rarely), the author enjoys reading, watching movies, cooking and traveling. He also likes watching football, baseball & hockey and hanging out with friends.  http://www.patnelsonchilds.com/about.html

Seven years have passed on Firma since Rokey’s narrow escape from The Order of the Bone. All of Firma is now at war. The living god, Cyure, and his merciless hordes have succeeded in conquering all other realms save two – the kingdoms of Iceberg and Glacia, far up in the Northern Expanse. As refugees pour into these kingdoms from all over Firma, Rokey, Flash and their companions are working constantly to stay one step ahead of Cyure, who still wants ‘The Scion’ alive in order to steal his awesome, but still largely latent power. Just as things look blackest, High Mage Ellispon and his fellow scholars happen upon a key which at last will enable them to translate the ancient scrolls taken from Moribar years before. It is from these scrolls that they learn of a magical object known simply as “The Heart”, which offers them the means to finally unlock Rokey’s enormous power. The only problem – The Heart is not even in Firma! And so the final quest begins – a race to find this fabled object and to give Rokey the power he needs to confront Cyure at last, saving both the people he loves, and the land that he has already given so much to defend.


How much of yourself is hidden in the characters in your book?

I guess pieces of me exist in all of my characters; some more than others. Very few people would be able to connect the pieces though. No one knows me that well.

How much of a story did you have in mind before you started writing?

I carried a notebook around for twenty years with smatterings of ideas for The Chronicles of Firma before I ever really sat down to write it. Hopefully it won’t take me another twenty to get my current book done, but you never know.

Can you tell us what genre you write?

Basically Fantasy and Science Fiction, although I try to throw some Mystery and Romance into everything I write as well.

How do you cope with writer's block?

I worry and suffer a lot, which basically makes it worse. I have no tricks for coping with it. When I can write, I write. When I can’t, I don’t.

How do you develop and differentiate your characters?

All of my work is character-based, so characters are developed before much plotting happens. I’m not sure just how it happens. They speak to me and I get to know them. I put them in various situations and I see how they behave. If I try to force them down a path that doesn’t make sense for them, the story just grinds to a halt, so they also help to drive the plot lines.

Do you have specific techniques you use to develop the plot and stay on track?

I am a big believer in outlines. I do a complete and thorough outline for each book, and I try to stay guided by it as much as possible. Of course, there are times when the plotline I’ve outlined just doesn’t work – like when it runs afoul of what the characters would naturally do. When that happens, I change the outline as necessary. For the most part, though, I make a plan and stick to it.

How (or when) do you decide that you are finished writing a story?

Well, first I try to make sure all of the major loose ends are tied up (leaving enough untied for a sequel if I want). Then I just write until it feels like the characters are done with the business at hand. There’s no formula. It’s more of an intuition.

Is there a message in your writing you want readers to grasp?

Well, the messages vary, but one of the main reasons I write is to give LGBT teens (and adults too) representation and role models in two genres that are very short on gay characters. That’s the reason there’s no explicit sex in my books. I want them to be accessible by teens and also enjoyable by adults, both gay and straight. Fortunately, I’m slowly seeing more writers doing what I’m doing, so in a few years hopefully there will be much more diversity in Sci-Fi and Fantasy.

What are you working on right now?

Right now I am working on a Science Fiction novel about a six-foot-eight teenaged genius named Jonathan Starlander. That’s all I can say about it right now.

Have you always wanted to be a writer?

Yes, but life didn’t give me the talent to write prose until I was nearly forty years old. So I went through the early stages of my life kind of drifting from career path to career path. I knew I would write one day. I just didn’t know when I’d be ready.

At what age did you discover your love of writing?

I started writing poetry at age ten, and I stuck with that pretty much exclusively until I started writing Orphan’s Quest, the first book of the Chronicles of Firma trilogy. I never went through the short story phase. I can’t do them.

What is the most difficult part of the whole writing process?

Outlining. It’s boring. I admire anyone who can manage a complete, well thought out novel without an outline. I sure can’t.

All kinds of things: Sci-fi and Fantasy of course, but also mysteries, romances, history, biography. I do a lot of non-fiction reading to research my books, and it all interests me.

What writer influences you the most?

Mercedes Lackey. Her Last Herald Mage trilogy inspired me to go ahead and write The Chronicles of Firma. It showed me that there was a market for good epic fantasy with gay heroes. For that reason, she’ll always be my literary hero.

If your book was made into a TV series or Movie, which actors would you like to see playing your characters?

I don’t have a clue, but I’d sure like to see it happen.

Where can people learn more about you?

They can read my books and speculate about me all they want. Other than that, I’m always happy to have new friends on facebook. I don’t go around spilling my guts all that often, but you can get a little more of a sense of what makes me tick. My facebook “me” page is facebook.com/patnelsonchilds.

Is there anything else you’d like to tell us about yourself?

A: I think I may have said too much already. I hate talking about myself. But I really want you to read my books!

Thank you for joining us, Pat.  The very best of luck to you on all of your adventures - please come back and visit again soon - let's stay in touch!

This giveaway is (U.S. Only) a signed copy of the Trilogy and (International) a pdf version of the Trilogy.  The winner will be announced at the end of the tour.