This sounds like a fabulous book and it is available for FREE today only!  I am getting mine right now!  ENJOY!!! 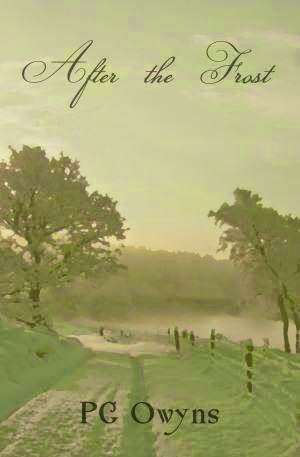 In the Pacific Northwest of 1928, Julian Powell lives a life that for most appears to be one of privilege—a perfect life in a huge house, servants, and carefully groomed grounds. No matter how idyllic it might seem, it has become a prison for Julian. His days are filled with the endless monotony of family gatherings, gossip, and brown suits. Overshadowing him is a life-long illness. Julian finds his only freedom from his overbearing family in secretly writing books celebrating the beauty of nature. Occasionally he escapes to the local bookstore, with the hope of seeing the town’s eccentric, William Neill. Julian’s life changes forever when he makes the boldest decision of his life. He leaves to take care of an ailing childhood friend, moving to a place that will take him away from all he has ever known to an unexpected new life. He becomes part of a family of his own choosing, and it brings him closer to the man that he’s been secretly falling for—a man who has a prison of his own to escape. As William and Julian struggle to overcome their pasts, will their secrets bring them together or drive them apart?

Get your Free copy here:

Thank you P.G. Owyns and best of luck to you!  Please come back and visit again soon!

We Welcome Back Author Demelza Carlton With The "See You In Hell" Book Tour!

A devilishly hot CEO. The angelic new office temp. A match made in Heaven or Hell?

Melody Angel takes a job as a temp at the HELL Corporation. Surrounded by eternal bureaucracy gone mad, demons who love making life miserable, and dying for a decent coffee, it may take a miracle for Mel's mission to succeed. She must find out what evil plans Lucifer and his minions have in store and stop them, using any means necessary.

Adding trouble and temptation to Mel's job is Luce Iblis, the damnably hot CEO, who has set his smouldering eyes on the new office angel and he's determined to claim her, body and soul.

Can ultimate evil and angelic perfection escape a limbo of desire and find a paradise of their own?


"Yep, that looks fine," Lili said, pushing the piece of paper across the table to Mel. "Just change it to the font in the style guide and you can take it up to Luce yourself."
"I…what? I thought you said I just had to write it and send it up to him," Mel protested.
Lili's eyes glowed red as if she sensed Mel's discomfort and enjoyed it immensely. "Oh, no. He came down here personally and placed the offending report on your desk. He waited a while, too, determined to make sure you understood his message. He insisted that I send you to report to him as soon as you received it."
Mel felt her jaw drop. "But…that was hours ago!" She felt her stomach and the sandwich inside it start to sink.
Lili grinned fiercely. "Then I suggest you change the font quickly and leg it up those stairs to Luce's office before you're any later."
Struggling not to swear, Mel marched back to her desk to make the letter and offending memo as perfect as she could. Fifteen minutes later, she pulled the pages from the printer and set off for the executive suite upstairs.
She kept a serene smile on her face as she strode through the maze of cubicles, nodding slightly every time she caught the eye of another demon. She'd never recognise them all, but it still seemed a good idea to stay on good terms with them. If her job survived the day and the belated dressing-down from Luce.
She shrugged. If her first job lasted less than a fortnight, so be it. She didn't much like the work, anyway, and there were plenty of demons to do it. It's not as if the HELL Corporation would miss her. She'd tell Raphael that the CEO definitely was Lucifer and let him sort it out while she went to Korea. She could taste the bulgogi already…
The cubicles were bigger now – spacious enough to take several visitors and a large meeting table between them. Mel knew she was nearing executive territory.
"Can I help you?" an imperious voice asked. Mel heard the words, along with the implied message that the owner of the voice would not help her. Mel was perfectly happy helping herself.
Mel's smile lit up her whole face. "Lili sent me to see Luce regarding a report." She proffered the papers.
The older woman's lips pursed as her deep, dark eyes narrowed. She had to be one of Luce's more senior demons. Her demeanour spoke of indescribable age and experience – all of it decidedly dark.
"I'm Mephi, Mr Iblis' personal assistant," the woman said, emphasising the demon's name. "All of his appointments go through me. Do you have an appointment?"
The woman's subtext was amazing, Mel decided. She radiated an aura that said Mel hadn't a hope of getting through her and she'd never be important enough for an appointment. Despite herself, she was impressed. She wondered how many demons balked at this formidable gatekeeper.
"I'm delighted to meet you, Mephi. I wish I'd known to call you first – but Luce left this on my desk and insisted I speak to him about it immediately. Given the urgency, I didn't dare delay." Mel let the slightest look of concern cross her face. "I haven't missed him, have I? I'll wait as long as I have to, if he's with someone. I'd hate to be the one responsible for this getting to him later than he'd like." She slipped on a sympathetic smile that suggested she wouldn’t want Mephi to bear the brunt of her boss’s wrath.
Mephi held Mel's gaze for a few seconds before she conceded her point and picked up the phone. "Mr Iblis, I have an angel here to see you." She managed to make it sound like something she'd found floating in the staff toilets.
"If you're talking about the girl standing at your desk with the papers in her hand, send her right in, Mephi," came a voice from behind Mel.
Mephi shrugged. "If you say so," she sniffed, clicking the phone handset back into place.
Mel nodded her thanks to Mephi with an unwavering smile, before turning to brave Luce in his lair. His office, she corrected herself, as she entered the airy space. She couldn't imagine a lair containing…
"Are those Pro Hart landscapes?" Mel asked eagerly. "I don't think I've ever seen the originals in oil before – just prints of them. It's the colours. They're always so vibrant, so real…"
"They are," Luce replied, "but you're not here to discuss my art collection. You've kept me waiting and I am far from happy." His eyes seemed to catch the light in odd ways, as if each was a singularity drinking the photons in, with no intention of releasing them.
Mel stepped forward and laid her papers on his desk. "The corrections you requested, along with a letter."
Luce gave the papers a cursory glance before turning the full pull of those dark eyes on Mel. "Do you know how long you've made me wait?" He lifted his chin. "Close the door."
For the first time, Mel felt a premonition of danger. The demon reclined in his desk chair with his hands in his lap, a picture of relaxed repose. Only his eyes seemed to belie the image – like a crocodile lurking beneath still, muddy waters. Did the crocodile know how much danger he was in?
"No," Mel said.

Demelza Carlton has always loved the ocean, but on her first snorkelling trip she found she was afraid of fish. She has since swum with sea lions, sharks and sea cucumbers and stood on spray-drenched cliffs over a seething sea as a seven-metre cyclonic swell surged in, shattering a shipwreck below.

Sensationalist spin? No - Demelza tends to take a camera with her so she can capture and share the moment later; shipwrecks, sharks and all.

The Ocean's Gift series was her first foray into fiction, followed by her suspense thriller Nightmares trilogy. She swears the Mel Goes to Hell series ambushed her on a crowded train and wouldn't leave her alone.

"A Guitar With Too Many Strings", by Author John Mellor - A truly unusual book unlike any other! 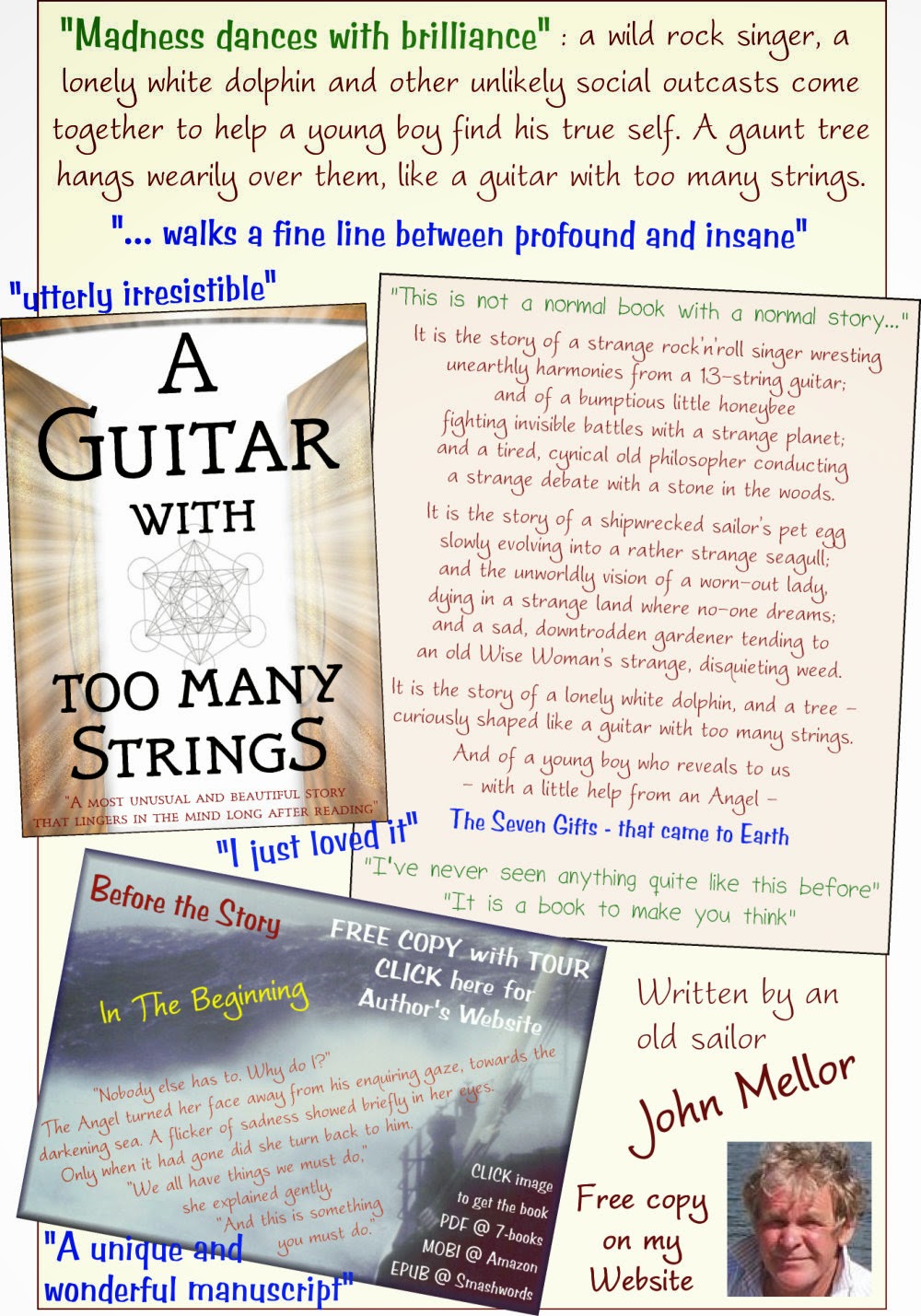