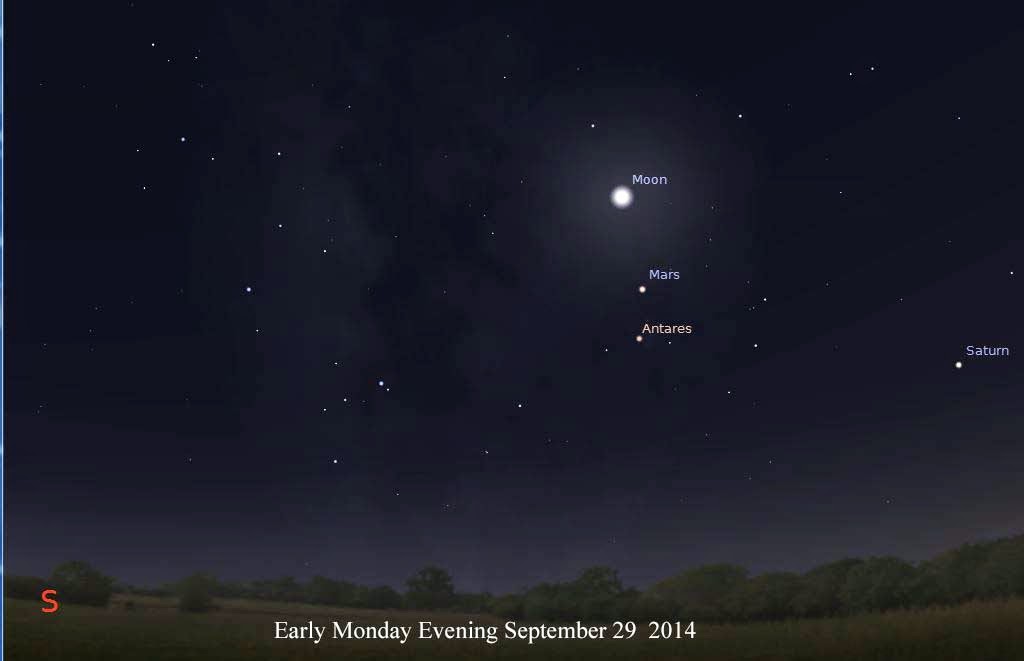 Go outside at 7:00p.m. and face the southwest.  The crescent moon is easy to spot. Look just below the crescent moon for a bright slightly reddish star like object.  This is the planet Mars.  Below the Moon and Mars is the bright red star Antares, the brightest star in the constellation Scorpius. Further to the West, or further to the right, almost out of view is the planet Saturn.

This is a multi dimensional view. The apparent close positions of the Moon, Mars, Antares and Saturn is an illusion.

A beam of light takes only one second to travel eight times around the earth.  That same beam of light traverses the distance from the sun to the earth in just 8 minutes. The light from the moon takes 1.26 seconds, Mars 12.7 minutes, Saturn 1.4 light hours.  These four objects are members of the family of objects that belong to the solar system.

The star Antares however, is so far away the light that strikes your eye this evening left the star 553 years ago.  That is to say it was produced when Christopher Columbus was but a boy of ten years old.  The world had yet to hear of the artist known as Michelangelo. What will the world be like in the year 2567 when the beams of light now leaving the star reach the earth? Just about everyone inhabiting the earth now would have been long forgotten including those whose names are regularly displayed in the headlines of today's morning news.


The name Antaries means the "rival of Mars."  Easier to understand when we use the Greek word for Mars which is "Aries," That is, "Anti-Aries." Every two years the planet Mars and Aries can be seen riding the sky together.  Since Aries is a red star and Mars is a red planet the question will arise as to which of them will outshine the other.  The keen observer might note Mars wins the battle this time because it does appear slightly brighter than Antares.

If you wait until the next evening the moon would have moved some 12 degrees to the East of its current location, Mars seems to stand still with Antares and Saturn.  It will take a few evenings to establish Mars eastward movement with respect to Antares but Saturn appears stationary 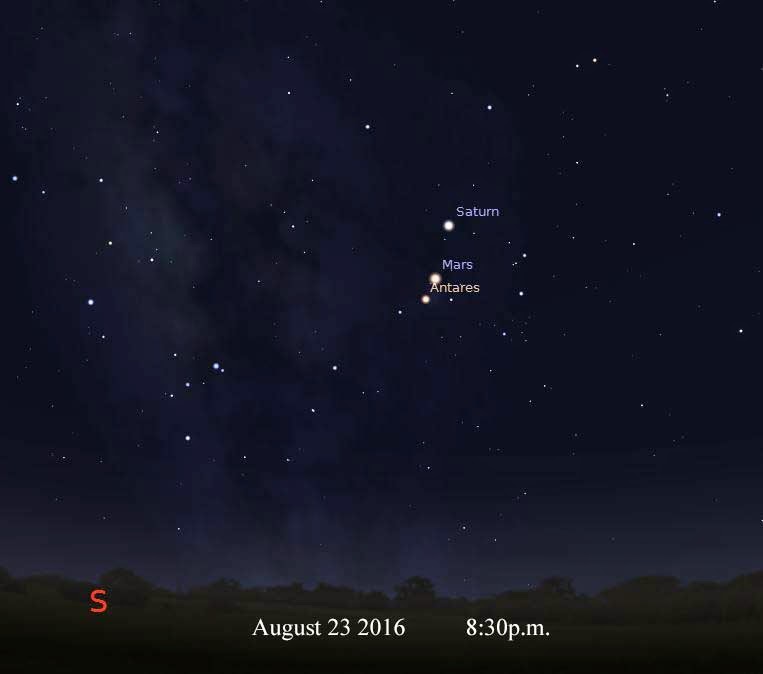 Our second scene takes place two years later.  Mars has completed one circuit around the sun, in front of each of the twelve Zodiacal constellations and once again appears close to Antares.  But now we see in two years the Moon is replaced by the planet Saturn. It took Saturn two years to appear to move from the right hand side of our first image to this, the second image. It will take Saturn nearly thirty years before it makes it's circuit around the Zodiacal constellations to once again appear with Antares.  Where will you be thirty years from now? Will this approach of Saturn in 2016 be your first and last view of the event? 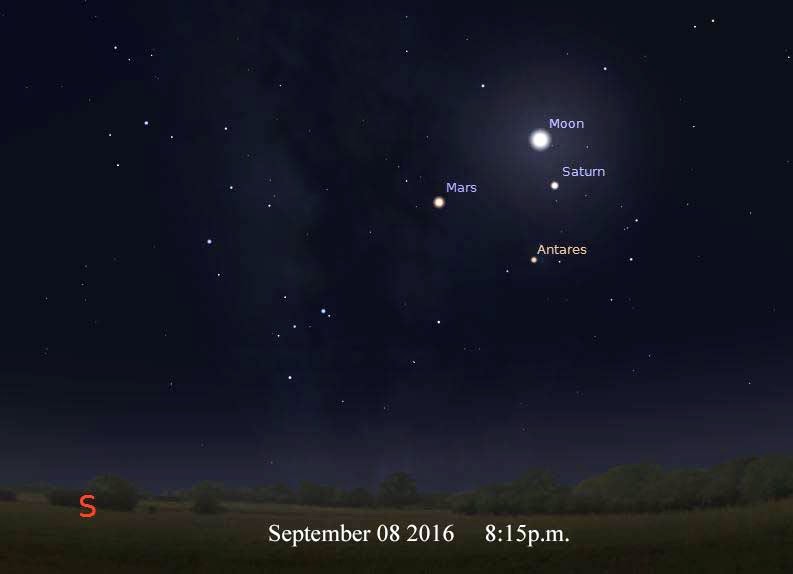 We have to wait until September 8, 2016 for the appearance of the moon.  We observe Mars has moved to the East, and Saturn has taken the place of the Moon, Mars and Antares from the first view Monday evening.

With just these simple illustrations it is easy to understand how the Greeks interpreted the motions in the sky as clockwork.  The Antikythera mechanism mentioned in previous posts lend verification to the concept that far off beyond the Eastern horizon lies a mechanism capable of moving the real sky and all its individual elements at their correct speeds and headings. The mechanism was cranked by three goddesses known as the Fates.

Observers of the skies 10,000 years ago or more noted the set of five wandering "stars."  Today we call these planets: Mercury, Venus, Mars, Jupiter and Saturn. Attempts were made to try to predict the position of these five with respect to the background stars.  Always their predictions had a measurable error.

"Build better measuring devices... change the mathematical and physical models to fit the observations..." was the solution.  The same holds true today.  The positions of the planets are known to great accuracies... but there is still today an observational error.
We can determine the distance from the center of Earth to the center of the Moon to an accuracy whose error is equal to about the distance across a paper clip. Why do we need to improve on this? Because there is a measurable error.  It may take a more accurate set of gravitational laws than what Einstein provides, or perhaps there are influences we have not yet taken into account. But there is an error.

An excellent description on how we can measure Earth - Moon distance to such great accuracy can be found on Google: "Einstein the Moon and the Long - Lost Soviet Reflector."