"The Kabrini Message", the Synopsis

First, a "housekeeping" issue:  This is the end of the first week of the new blog!  I hope and plan to post 3 days a week.  Since I started on a Wednesday and wanted to do 3 posts this week, I did Wednesday, Thursday, Friday of this first week.  Going forward, posts will be Monday, Wednesday and Friday of each week.


Now, before I get ahead of myself with publication details, let's take a look at the book's synopsis, so we know (very briefly) what it is that I felt so compelled to see published.  Here is a brief synopsis of The Kabrini Message.  Keep in mind that there is much more to it than this, with many subplots and twists and turns, but this will give you the very basic idea:

They had finally made contact.  And the world would never be the same…

Jeffrey Driscoll is a rugged yet charming adventurer with a hidden consciousness: when he gazes through the eyepiece of his telescope, he senses someone is looking back.  Haunted by the stars since boyhood, he sets off on an exhilarating quest that takes him across the planet.  Not quite sure what he seeks, Driscoll only knows he must keep moving. Throughout his reckless escapades, Driscoll is often accompanied by Mondo (a childlike, affable young African), Mohammed (a surly, sun-blasted Arab) and Goldstein (a cynical New York Jew), an unlikely trio that never fails to plunge face-first into hilariously perilous predicaments.

When an uptight British archeology professor hires the ragtag crew for a dig on the Greek , Driscoll stumbles upon a miraculous find: ancient crystals with celestial coordinates that will connect mankind with the Kabrini, a highly advanced alien civilization.  Driscoll’s groundbreaking discovery ultimately leads to Planet Earth’s first global space effort, the Legacy mission.

Years later, when Driscoll Mining and the U.S. Army complete deep space construction of the Kabrini communications network, the Legacy mission is deemed a success.  Mankind finally makes contact…only to discover the Kabrini Message isn’t exactly what we want to hear.  The Kabrini view our civilization as one of heightened intelligence yet no spiritual enlightenment—a dangerous combination.  Although the wise alien race has the ability to offer mankind limitless knowledge and staggering technological advances, they fear our barbaric people will only use the information for evil.

As if to prove the Kabrini right, a fanatical terrorist group’s hunger for revenge leads to an explosive turn of events, threatening the Kabrini network; but Driscoll will stop at nothing to save the project.  As his obsession with the Kabrini grows and the Legacy mission spirals out of control, he risks losing it all—his company, his grasp on what’s most important and the one thing he’s ever truly loved: his wife, Carol. 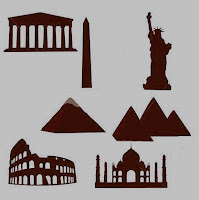 This thrilling Adventure meets Sci-Fi saga takes readers across the globe and beyond, from the jungles of Africa to , from to , from to , from to and finally to the deepest depths of space.  Join Jeffrey Driscoll and all of mankind on an unforgettable journey to alien contact and universal enlightenment in The Kabrini Message.

Have a great weekend everyone and Monday we'll begin "The road to publication"!
Posted by Kabrini Message at 9:00 AM