We are thrilled to have Ally joining us again today, this time to discuss her newest novel, Burning Both Ends. 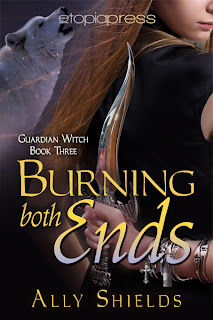 Here is a short Author's Bio and then we'll get started:

Ally Shields was born and raised in the US Midwest, along the Mississippi River, the setting for her urban fantasy series. After  a career in law and juvenile justice, she turned to full-time writing in 2009, and Awakening the Fire, the debut novel in her Guardian Witch series, was released in September 2012.  Ally still lives within driving distance of the Mississippi with her Miniature Pinscher, Ranger. When not writing, reading, or spending time with family and friends, she loves to travel in the US and abroad. Way too often she can be found on Twitter.

Welcome Ally!  Please tell us about your newest release and what inspired you to write it.

Burning Both Ends is the third book in my urban fantasy Guardian Witch series. While each book has at least one crime/mystery that supernatural cop Arianna Calin resolves within the book, there are storylines that continue throughout the series. This novel was really a consequence of the first two, although I added a few new elements to keep the reader on their toes. :)

Burning Both Ends is all about divided loyalties. The vampire Andreas, who holds a piece of Ari's heart, is surrounded by enemies in Canada, and her friend Steffan, the local werewolf leader at home in Riverdale, has been kidnapped.  Ari can't be in two places at once, but she can't abandon either one. When the Magic Council orders her home, she's forced to face impossible choices with life and death consequences.

Did you do specific research for this project?

Not as much as I've done for others. Basically, it was small things like flight times between Riverdale and Toronto, and I Google-earthed (new verb :) ) some districts in Toronto. The biggest issue in this book was keeping the time line straight.

If you could spend a day with one of your characters, which one would it be and why?

Hmm, for a change of pace, I think I'd pick Claris, Ari's best friend. Claris is a human who runs an herb and healing shop in the Olde Town tourist district, selling live and dried plants and natural healing mixtures. It would be fun to learn all about her craft.

Which of your works would you most like to see as a movie?

Of the three published so far, I think this third one would be the most fun as a movie. It has a little bit of everything, including a semi-retired spy!

How do you balance your “real life” with writing?

I don't do a very good job of that. When I'm writing or editing, my real life gets put on hold. Especially with editing, I work long hours to get it done. Sometimes I have to force myself to take a break, get away from the computer, got out to eat or shopping, and enjoy time with friends or family. I hear a lot of complaints from the real life side!

If you could go back in time, what historical period or event would you most love to visit?

Regency England, but since I know it's been overly romanticized in fiction books, I'm not sure I'd want to stay very long. It would be fascinating for a while to see the fancy balls and the carriages in Hyde Park, until I verified the people bathed infrequently and London had open sewers!!

Who or what is the epitome of a hero to you?

I think we find heroes in every walk of life and in unexpected situations. They are mentally strong, naturally protective, confident, but willing to be vulnerable to those they love. A hero stands up to challenges and runs towards the danger rather than away. Unfortunately, the US has needed a lot of real heroes in various tragedies this year.

Because of the continuing story arcs in this series, I strongly recommend that the books be read in order.

What other projects are you working on?

I'm currently writing book five in the series, and I'm marketing a spy thriller.  If I find time, I want to write a short story for a new anthology coming out, and I also have a plot for a #YA novel running around in my head.  My muse just never sleeps!

Friend or lover. Life or death…

Supernatural cop Ari Calin arrives at the hostile Toronto vampire court with an ultimatum from the Riverdale vampires: Sebastian, Toronto’s vampire prince, must stop his unprovoked attacks—or else. Ari wasn’t expecting a fight—the “or else” was typical vampire grandstanding. But even with vampire Andreas De Luca by her side for a show of strength, things get ugly fast. Toronto’s vampire world is in crisis, and surrounded by enemies, Ari and Andreas find themselves under attack.

Then Ari gets the call from the Magic Council ordering her home. Steffan, a good friend and leader of Riverdale's werewolves, has gone missing during top secret negotiations with the US government, and is believed to have been kidnapped—or killed.

Andreas can't abandon the Toronto vampires, and Ari can’t leave him to face impossible odds alone. Neither can she disobey her orders from the Council, or leave her friend Steffan to be tortured and killed. Ari's loyalties pull her in two directions—the closest thing to love she’s ever known on one side, and friendship and duty on the other. If she can stay alive long enough for the choice to matter…

Fangs flashed where her cheek had been an instant before. Ari whirled, crouching to meet the vampire’s return charge, and her fingers sparked, witch blood clamoring for action. Refusing its urgent call, she threw the magic powder as he wheeled and sped toward her in a blur. Green particles sparkled. A loud thump. The vampire recoiled from the invisible barrier and took two staggering steps. A direct hit. Before a smile more than touched her lips, the dark figure recovered and leaped. Ari backpedaled, but his weight drove her to the hard ground.

He grinned down at her, a lock of dark hair falling across his forehead. Trapping her arms above her head, he leaned close, his dark eyes glittering. He brushed her lips with his and whispered, “Better—but not yet good enough.” Andreas shifted his six-foot, muscled body, sprang up, and offered her a hand.

Ignoring the courtesy, Ari scrambled to her feet. Getting pinned by your boyfriend wasn’t always a good thing. “Back off, bloodsucker,” she grumbled. She shook out the fallen leaves and pine needles that clung to her long, honey-colored hair.

Andreas chuckled. A rich, warm sound. “Touchy tonight. Did I put your nose out of joint, little witch? And here I was, trying to help with your training.” Andreas glided across the forest clearing with the smooth grace of a natural predator. He collected their cell phones from under a park bench where they’d stashed them earlier in the evening and handed her one.

“Thanks.” Ari avoided his eyes. Damn right she was annoyed. She was competitive, and second place wasn’t good enough—even against a master level vampire. Especially one who wasn’t really trying to kill her.

Andreas studied her face, his voice pragmatic. “I am glad you are taking this seriously. Other combatants will be less charitable than I, less mindful of breaking your pretty neck. I can almost guarantee Sebastian will continue his fight with Prince Daron, and next time he may lead the attack. You might have to face him again.”

“Oh, come on. You can’t really believe he’d come to Riverdale. He’s too comfortable lording it over everyone in Toronto.” Andreas shrugged. “It is unlikely, but a sobering thought. With Sebastian, anything is possible.” He frowned, obviously thinking about the brutal vampire leader. “He has grown more aggressive, erratic, perhaps less sane, as sometimes happens with the elder ones. Our defeat of his minions will only fuel his rage and make him more determined.”

“Minions? What kind of word is that?” Ari demanded. “You really should update your vocabulary. Being born in seventeen hundred and something is no excuse for using words no one understands.” She was just being bitchy. In truth, she wouldn’t change a thing about Andreas’s speech or sexy voice. The archaic words, the faint accent of Italian aristocracy, and the shivers of sensation it produced were all part of him. She never got used to the seductive effect…even when she wanted to be annoyed.

Amazon
Barnes and Noble
Kobo
ARe

Other books in the series:

Thank you so much for joining us today, Ally!  All the very best of luck to you with Burning Both Ends and please come back again anytime!

Posted by Kabrini Message at 7:43 AM