Contributing Astronomy Editor, Dan Matlaga: HOW DO YOU FEEL? 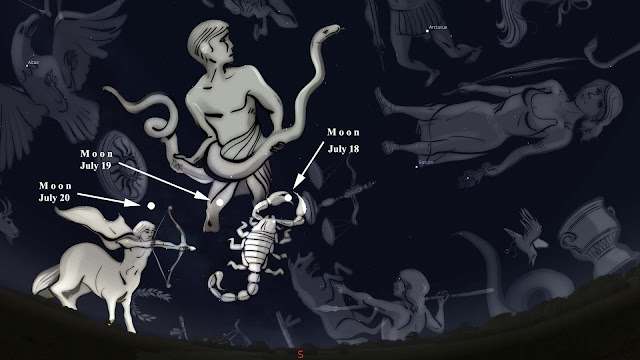 How Do You Feel Today?

The illustration highlights three constellations visible these mid – summer nights.  It is drawn to highlight these three in their positions at 9:00 PM.  In addition, I’ve indicated the positions of the moon for July 18, 19 and 20 as a location guide.
If you go outside Thursday July 18, and face south, you will see the moon in front of the stars of Scorpius.  In fact it appears the scorpion holds the moon in one of its pincers. Picture the moon in your mind’s eye as the center of a clock face.  Draw a line from that center outward toward the position of the seven on the clock face.  You will pass near a bright reddish star named Antares.  It is important that you can find that star.

The evening of July 19 finds the moon in the middle of the thigh of Ophiuchus, the serpent bearer.

Saturday evening we find the moon just above the head of Sagittarius, the archer.
The increasing moonlight these three nights makes it nearly impossible to trace the stellar outlines of these three constellations.  Full moon occurs Monday July 22.  It won’t be until Friday July 26 when the moon rises after 9:00 PM, the time frame of our illustration, that the sky will be free of moonlight.  Then the star Antares can be a reference point.

It should be noted for scale, the distance from the horizon to the top of the head of Ophiuchus is three-quarters the distance from the horizon to the overhead point.
A scorpion, a man with a snake wrapped around his waist, and a centaur with bow and arrow. They seem as though they are a discordant set of images.  The usual approach to make some sense of these three would involve cracking open a book or two about constellations. It would be a mistake because such books lead you down the wrong path.

Of the eighty-eight officially recognized constellations only three, according to mainstream thinking, look like the objects they represent.  Number one is Orion the hunter, two is Cygnus the Swan and the third is Scorpius the scorpion. I believe there are more than three, but we will take that up in another post.
What places the scorpion on this list is the long curving tail of the constellation.  It resembles a large fish hook complete with an anatomically correct star to mark the singer of the scorpion.

So, you are stung by a scorpion, what should you do?

“Step on it,” is the usual response from someone who was never stung by a scorpion. The intense pain from the sting is instantaneous.  It does not build. It feels like the worst burn you have ever experienced and then some. The pain is such that your first instinct might be to seek medical help.

Looking for medical help? This is where Ophiuchus enters the picture. He was the first prominent physician. He was so good at his healing art it was claimed he was capable of bringing the dead back to life. Your friendly neighborhood physician knows of this constellation not by the Roman name Ophiuchus, but rather by his Greek name Asclepius. The first sentence of one version of the Hippocratic Oath begins: “I swear by Apollo Physician and Asclepius…” I was informed by several different physicians not many physicians take the Hippocratic Oath because they know they cannot live up to what it says. Something to think about next time you are under the knife.
The connection of this prominent physician and snakes is related to the snake’s ability to shed its skin. Before shedding, typically the snake looks dull and listless.  After shedding, the colors are the most vibrant the snake can display.  The Greeks and others interpreted this transformation as the snake’s ability to build a new body in the old.  A snake could be killed, its body left to dry out in the sun then ground up as a powder, then the powder used as an ingredient in medicine. The aim was to give to the sick and ailing that magical quality of building a new body in the old.

Note, too, how (if drawn completely) the extended right leg of Ophiuchus would rest at the stinger of Scorpius to crush the source of pain.

Unfortunately there is more to life than physical pain… there is mental pain and suffering. The Greek Sagittarius, the centaur, helps here.  I recall a fourth grade school bus trip to the Bronx Zoo.  My teacher was sitting across the aisle from me.
I asked the rhetorical question as to how many centaurs are kept at the Bronx Zoo.  She looked at me and remarked how centaurs are one of those crazy make believe creatures invented by the Greeks.  She added centaurs really don’t exist.

What the Greeks were trying to say, but our culture doesn’t get (after all, as a culture we don’t understand our own mythic images, let alone the Greeks), is there are two parts to being human.  Part of us is animal.  We have similar blood, musculature and bone architecture of other animals.  That physical is the horse part of the centaur. We in addition have a spiritual part as well. The spiritual is represented by the human half of the centaur. The Greeks simply put our dual nature out in the open.

Centaurs were not very nice.  They were drug addicts, alcoholics and fought with anything that came down the pike. Sagittarius was the exception.  He was a physician, philosopher, and playwright, composer of hymns, teacher and poet.

We cannot help but notice Sagittarius has his arrow aimed directly at the heart of the scorpion, the source of mental pain and suffering.  Greek, Egyptian and others thought of the heart as a center for emotion soul and thought.  They did not know the purpose of the brain. This ancient concept is with us today.  On Valentine’s Day we have stylized images of hearts and not of brains.

Far from being simply a mass of random stars where we draw lines and images of mythic creatures, myths of stories we all know are not true, we can now look up at the stars and relate.  If the physical and spiritual are in balance (Sagittarius) we have nothing to fear from mental pain and suffering. On the other hand, if we are suffering from physical pain and suffering, have no fear; the doctor (Ophiuchus) is near.

Posted by Kabrini Message at 1:58 PM