I want to give a warm welcome to our Guest Author for this week, Erin Moore!  Erin's brand new book, Kissed by Moonlight, was just released and we are so happy to have Erin here today to tell us not only about Kissed by Moonlight (of course!) but also to learn a little more about werewolves in general.

The stage is yours, Erin! 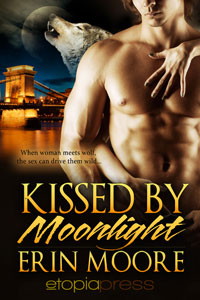 The Werewolf as Archetype…

…and why we can’t get enough of them.

You may be wondering, what is an archetype?  For those of us who weren’t English majors, it is “in Jungian psychology, a collectively inherited unconscious idea, pattern of thought, image, etc., universally present in individual psyches.”  [Dictionary.Reference.com]
What that means is that the archetype must be a symbol or image that all cultures share.  The Jungian idea of the Trickster is often linked to shape-shifters, but werewolves are more than tricksters.  They speak to something primal and elemental in all of us:  the ability to change from human into pure animal.  And, by being animal, these werewolves are doing things that we cannot.  They are reacting on instinct, allowed to express their “shadow” selves and be the animal that is inherent in all of us.
The rise of modern fantasy (and paranormal romance!) has given us werewolves who retain their essential human consciousness after they shift, allowing us to empathize even more with a being that must live continually on the margins of society, forever doomed to liminality and secrecy.
In my own writing, the idea of a love story between two werewolves from warring clans, sort of Romeo and Juliet for shifters, took shape.  Morgane and Aelric emerged as these two dark, perhaps slightly damaged characters, who were very much marginalized within society and even within their own families.  It is their status as outsiders and their own fight to be recognized that defines their relationship with each other and with the world around them.  Morgane pretends that the world around her will just come to accept her animal nature, while Aelric believes he can fight through the perceptions of humans.  This tension, along with their sexual attraction for each other (of course – it IS romance), carries the story.
So why do we care that these werewolves are something more than themselves?  Because when we wonder why we can never get enough Taylor Lautner, or why we fall in love with the characters on True Blood, we know it is because they are expressing some deep part of ourselves. The animal is within all of us.

Blurb from Kissed by Moonlight:

Morgane has problems with men. Being a werewolf, and wary of humans, it’s inevitable. But when she meets the intense and enigmatic Aelric, she falls hard. She’s never experienced feelings like this before: desperate for his touch, crazy for the feeling of his skin on hers, and ready to surrender to him heart and soul.

Aelric has never had a problem with women; he’s a master of seduction. So when his alpha orders him to seduce Morgane for information about her clan, he accepts. He’s entranced by her supple curves and soft lips, but for once, he wants more than just her body. He wants her for his mate. But he can’t reveal his true identity, or his intentions. For he’s part of a rival clan of werewolves intent on the domination of Morgane’s pack. And dark forces are gathering that might destroy their fiery relationship…