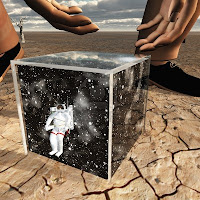 "Of course it's illegal!  But how can we stop them?  They've got everybody!"
The Prime Minister sat back.  "Sorry, Inspector.  I didn't mean to imply that you or your people weren't doing your job, but ....”

“I should hope not, Mr. Prime Minister," the Inspector cut him off.  "My department is doing everything possible to control the situation, but people are starting to panic.  There's practically no limit to what they can do.  Everyone is just damn scared."

The Prime Minister of Trade, the man who held the highest office on Earth, cleared his throat nervously.  He, more than anyone else on Earth with the possible exception of Transporter technicians, had the most opportunity and need to make use of Transporters, those marvelous devices that make possible traveling from one place to another without moving, and he just knew there would be an incident soon.  It was just a matter of time.  He looked down at the news magazine in his hands whose cover depicted the First Lady of the Common Market nude (but for appropriate pictorial censorship) attempting to solicit the entire men's Discus team in the locker room after a recent match.  He shuddered and asked, "Is there any accurate estimate as to the number of Copies, Inspector?"

"No, Sir," replied the Inspector, "because there is no way of telling how long they've been copying.  And storing”, he added.

"Yes, damn it," repeated the Prime Minister a little weakly, "and storing”.  He had a brief vision of a Copy of himself standing at attention, or perhaps in some more embarrassing pose, in a hidden storeroom somewhere, just waiting to do ....  what?

The Inspector continued, "We must assume the worst, Sir.  They've only just begun using the Copies but we must assume that they have been making Copies of everyone who has ever used a Transporter since they were first put into public use almost seven years ago.  So far we've been lucky.  Except for that incident, no real harm has been done."

The Prime Minister knew the Inspector referred to a ceremony at the top of the Eiffel Tower, after which the President of France and several members of his personal staff, followed by video cameras and most of the eyes of the world, walked pleasantly over to the railing, removed their trousers and dove over the side, singing "I Love a Parade" all the way down .  Several people were trampled as the crowd at the base of the Tower scrambled to avoid the plummeting president and his entourage, and one elderly cabinet member had a heart attack at the top.

"How did they manage that?" complained the Prime Minister.  "I mean, I know you can't tell a Copy from the real person even up close, but how did they make the switch?  Where was the real President of France?"

"On his way," replied the Inspector.  "That's how they did it.  They simply sent in the Copies a half-hour before the real President arrived, knowing no one would question the President of France about being early.  The President announced he had a busy schedule and wished to proceed with the ceremony immediately and they did."

"But what about his staff, his guards”, persisted the Prime Minister.  "Where did they get Copies of them?  There were at least a half-dozen other personnel that accompanied the President."

"Most of them have Transported with him at one time or another”, reminded the Inspector, "so they had Copies of them; and for the odd man or two they just dressed up Copies of Transporter technicians or other non-famous people that they have made Copies of and kept handy for just such a need."

"What a mess”, said the Prime Minister, shaking his head slowly and again looking down at the magazine.  He noticed for the first time that the First Lady had money rolled up, poking up from between her bosoms.

"Yes," agreed the Inspector, "it was in very poor taste for the video crew to have followed their descent in 3-D.  After all, at that time they assumed it was the real President of France.  And the zoom shot of that spectacular mess at the bottom ....  "

"Not that mess!" blurted the Prime Minister.  "The whole mess, I mean the whole thing, this whole ridiculous situation!  What are we going to do?"

"If they would just communicate with us we could work something out”, answered the Inspector.  "But there's been no contact with them since they left for their next planet
customer, wherever that is."

"Well”, scowled the P.M., "my guess is that they are still within communication range out there somewhere but just refuse to answer us.  They must have stayed close enough to Transport the Copies back here."

"And, " added the Inspector, “close enough to tune into the Transporter signals to make a Copy.  But they never told us they could make Copies of whatever was Transported from one terminal to another, anywhere on Earth."

"No kidding!" smirked the P.M. "And now with over four thousand of the blasted machines in use in every country on Earth for almost seven years...”  The Prime Minister was slowly shaking his head again but just looking down at the floor now.  "And I was against it!" he said.  "From the beginning, I was against it.  ‘It isn't natural’, I said.  I told them we should never trust an alien and never, NEVER buy anything from an alien!  But would the rest of the Council listen to me?  No, no...everybody wanted the damn things so badly, I was pressured into it.  And now look ... what a mess!"

"Well, at least no one can blame you, personally”, offered the Inspector.

"No, but that doesn't help much.  We must find a way to put a stop to this sort of thing," the Prime Minister held up the magazine, "or at least find out what they want”.

"It doesn't look like it's blackmail -- they've never made any demands with any of these pranks," said the Inspector.  "At least not yet.  But maybe they're just trying to get our attention first.  Well, I think they've got it."

"Pranks?!” shot the Prime Minister.  "I think that is a bit of an understatement, Inspector."  He tossed the magazine on the desk.  "Do you know -- and this is being kept under wraps for as long as possible -- but, yesterday afternoon we picked up the Pope selling whoopie cushions door-to-door in ?  A Copy of the Pope!!  This has got to stop, Inspector!"

"Well, at least we know how they make the Copies do what they want," said the Inspector, picking up the magazine.  "When we finally nabbed her Ladyship, here, she I mean it went completely dead instantly.  Simply ceased to function.  The lab boys did a post-mortem post-haste and found that when the aliens re-integrate their Copy of whoever they've tuned in on, they mix into the brain a lot of computer-like circuitry that allows them to program the Copy to perform whatever task they so desire."

"Wonderful," the P. M. droned dismally.  "You do realize the implications of that, Inspector?”

"It means," continued the Prime Minister”, that if our funny friends out there," he waved at the ceiling, "decide to stop playing pranks, as you call them, and get serious, there is nothing they could not accomplish.  For example, they could have a Copy of the Secretary of Commerce kidnap me and replace me with a Copy of myself and then I - I mean my Copy – could start the biggest economic upheaval this planet has ever seen!  Amid the chaos the aliens could return, aided by as many Copies as needed, and take over the whole damn planet!  This is serious, Inspector.  Serious!"

The Inspector began a slow smile.  "Yes, isn't it, Mr. Prime Minister."  And then, in the Prime Minister's own native dialect of German, said, "The trouble with you Earthmen is you have no sense of humor."

The Prime Minister looked dumbfounded.  "What?!" he gasped.

The Inspector stood up, collected his coat, and said, "Would you mind, please, accompanying me to the black sedan parked in front of this building, Sir?  Your personal guards will accompany us, of course, but I'm afraid you'll find they are not quite themselves today."

"I most certainly will not!" shouted the Prime Minister.  The Inspector did not lose his pleasant smile.  "Then I'm afraid the Copies of your household servants most certainly will murder your wife and children if we do not arrive at a Transport station just outside of town in twenty minutes.  You may inform your secretary that you will return in one hour ....well ....  it won't exactly be you, but you need not mention that.  Come, Sir."

The Copy of the Inspector helped the Prime Minister on with his coat.

THE END
Posted by Kabrini Message at 9:00 AM