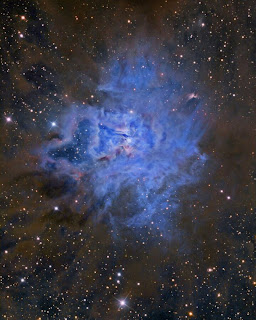 Last month I received a wonderful letter in the mail (a real letter, not an email!) from Dan Matlaga.

Dan explained that he read about the publication of The Kabrini Message in The Newark Star Ledger and went on to tell me that he, along with another friend, David Van Pelt, and Joe were good friends in our hometown of Garwood, New Jersey back in the 1960's, where they shared a mutual love of astronomy.

The three close friends lost contact when they attended colleges in different parts of the country, but each, in their own way, continued to "follow the stars".

Dan graduated from the University of Texas with degrees in Astronomy and Geology and went on to work at the National Radio Observatory in Greenbank, West Virginia and later as Curator of Astronomy at the Newport News Planetarium in Virginia, followed by a 36 year career teaching Astronomy at Arizona State University.

Dan was also invited to present a paper at Oxford University on his research concerning the role astronomy plays in Herman Melville's classic Moby-Dick.  It is fascinating how when the sky is factored into the novel, the entire book opens up.  There will be much more on this later, but for now...

I am excited to introduce you to Dan who will tell us a little about his, Dave and Joe's friendship and hopefully will be a regular contributor on the subject of astronomy, more early "Joe stories", the book he is writing  (An Astronomical Companion to Herman Melville's Moby-Dick) and anything else he'd like to share!  Welcome Dan, the stage is yours....

I knew Joe Egles.  We were introduced through the third member of the group, David Van Pelt. Dave lived behind Joe, I lived several blocks away. We grew up in the all but invisible town of Garwood New Jersey, population about 5,000.

What held our trio together was our insatiable curiosity of the world around us and astronomy. We were for example, frequent visitors to the American Museum of Natural History and the Hayden Planetarium.
During the summer, late Friday afternoon,  we would begin our five mile trek from Garwood to Surprise Lake in the Watchung Reserve for the weekly observing sessions of the local amateur astronomy club. Hours were spent with a dozen or so telescopes giving us great views of wonders of the summer sky.  We usually left the observing party at about midnight to begin the treck home.  I recall one such return trip.  It must have been about 1 a.m, when a patrol car pulled up.  The officer fires up his five cell flashlight into Joe's face and asks: "What is your name?"

"Who are you?" he asked me with what seemed like the light of the sun in my face.

It was Dave's turn.  "What's your name?" the officer asked.

I started to laugh uncontrollably.  I had to lean on the patrol car to prevent my falling over onto the curb.
Joe was shaking his head in a "no” gesture with his eyes shut, his hand covering his mouth to conceal laughter.

"What's so funny?" The officer inquired.

His question raised the ante such that by then I was holding my side.  My laughter made it difficult to get a breath of air. I thought my heart was about to stop.

Joe was now standing off to the side with both hands covering his face.

The officer called into his dispatcher giving the dispatcher our descriptions and names: "Joe Engels, Dan Matlaga and Diogenes."

This was a source of great discussion for the rest of our hike home.

Communication between us was lost in the late 1960's.  Ten years ago I received an e-mail from Dave.  He was married and living in Chicago.  He was retired, having been placed on disability due to a work related accident.  Dave and I tried to find Joe but with no success. From my side I believe I was misspelling Joe's last name as Engles.

To be conversant with my family still in Garwood, a few times each week I would look at the electronic page of the Newark Star Ledger.  It was on January 26th I read the article of Joe's book and the efforts of his sister Marie to get the book published.

All this was and still is quite a shock to me.  Joe's interests included astronomy, photography and ham radio.  I do not recall Joe ever expressing any interest in literature.  I find it unusual Joe did not try and contact either David or myself, because he knew of my interest in literature. I've been reading Moby-Dick since fourth grade elementary school and in fact named my old 1957 Buick Special "Pequod."

I'm so sorry the three of you didn't have a chance to reconnect before, but so happy that you are here now!  Thank you for sharing with us Dan and we look forward to hearing more!

Posted by Kabrini Message at 8:59 AM