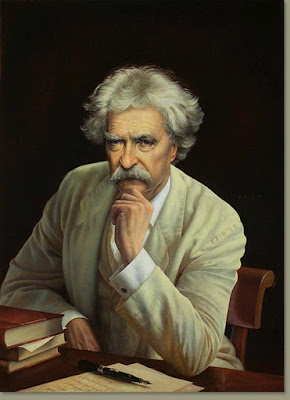 Mark Twain read everything he could get his hands on.  Often he would remain in bed until 3:00 p.m. surrounded by newspapers, magazines and books. A daughter remarked she could not understand how her father could have personal opinions on every historical figure, every government and every disease known to man.


When Mark Twain died April 1910, his private book collection of 3,000 volumes was donated to the local Redding, Connecticut Public Library. This was appropriate as Mr. Twain aided in the founding of the library. Unfortunately the books were placed in the public stacks, so today considerably fewer books remain.

Placing Twain's library books in circulation was unfortunate because lost are his marginal notes about the book author's observation. In one book that survived, there in a paragraph or two about the soon to be dedicated 60-inch telescope atop Mount Wilson, we find Twain's marginal note.  "Someday write about a debate between a telescope and a microscope - which has the grander view?"


Certainly first thoughts would place the Hubble Space Telescope  vs. the Hadron Collider in contention. These headline instruments are a wonder of our modern age.

Let's take a different tack to note two microscopic discoveries that do not involve billion dollar instruments.
Jean-Michel Claverie and Chantal Abergel went into the world to find giant viruses.  These viruses are so large they can be seen with an optical microscope.  A good optical microscope can magnify 1,000 to 2,000 times. The electron microscope was invented in
the early 1930's in Germany.  It could magnify 400 times, but demonstrated the use of electrons to illuminate a specimen, instead of light, was workable.  By 1940, electron microscopes were able to magnify 140,000 times.  Today the number is 2 million times.


These pandoraviruses are so unlike any other viruses, some have suggested they may make up a fourth domain of life on earth.  It has been suggested that a study of genes may turn up a strand of DNA unlike any on earth.  The strand may represent part of a life form from space that was incorporated into an earth life form.

What Jean-Michele Claverie and Chantel Abergel discovered from the mouth of Tungquen River and from a freshwater pond in Australia was the largest pandoravirus found to date.  A typical virus may have as many as ten genes while the pandoravirus has about 2,500 genes. The discoverers of these super sized viruses analyzed their viral DNA.  Approximately 7% of the DNA is common to other viruses, while 93% is unlike any other DNA ever observed.  That is, it has no lineage back to earlier forms.

Does this 93% represent alien life? Or is this simply another demonstration of how little we know of earth's life possibilities? 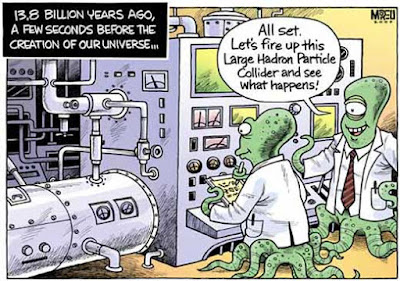