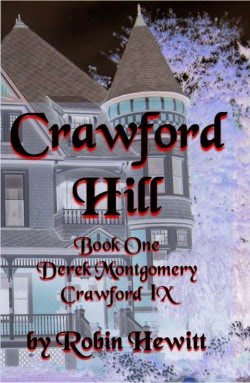 Welcome Author Robin Hewitt and Crawford Hill!  This is a creepy (and I mean that in a GOOD WAY!) scary one.  It is Book One in the Crawford Saga...AND (as if that weren't enough)...there's a CONTEST!!!

Here's a little about Robin: 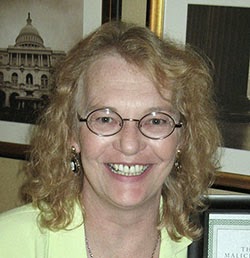 Born and raised on the shores of Michigan's Lake St. Clair, one of Robin Hewitt's earliest memories is of Mama warning her to beware of The Bogeyman, who lived in the caves on the banks of the Clinton River. Although extensive teenage explorations brought her to the conclusion that Mama had actually been worried that she would fall in the river, she never forgot the warnings or the idea that a monster could live beneath our feet, slinking out at night to strike terror in the hearts of unsuspecting women and children.

And here is just a taste of Crawford Hill:

Derek Crawford smiles pleasantly at the anger management counselor as the voices in his head beckon him into spiraling madness.

A burned-out and now unemployed child psychologist, Derek lives alone in the Victorian mansion on Crawford Hill. From his great-grandmother’s widow’s walk on the fourth floor he can watch the lights of Centerville blinking on as the sun sets over Lake St. Clair.

From the basement he can enter his great-grandfather’s network of caves, and prowl beneath the homes of the unsuspecting town.

As he nears his 29th birthday, one voice is getting louder. More persistent. It’s the gravelly voice of his old man, dead a dozen years but no less demanding than when he whipped his belt across Derek’s back.

Only one year left whelp, don’t you screw it up.

Derek knows he’s closing in on the deadline: to inherit Crawford Hill, he must be married and father a son before he turns thirty. A legacy he’s determined not to fulfill, because he refuses to chance perpetuating the insanity and bloodlust of the Crawford family tree.

He’s determined, that is, until unsuspecting Valerie Fleury knocks on the door of Crawford House. Against his better judgment, he invites her in for coffee and more, and a glimmer of hope pierces his soul. Until she mentions she’s working with the cops. Until she starts asking about the caves, and his parents, and a series of rapes and murders that are occurring around Centerville. Again.

That wench would look good barefoot and pregnant. Or dead and bloody.

With the stakes rising in proportion to the body count, Derek must confront the memories he’s spent his adult life learning to bury, and risk unleashing his encroaching madness to save the woman who might hold his redemption.

As promised, here it is:


Crawford Hill is on the Amazon Countdown during the blast, for those that have added this to your blogs for today’s blast, thank you

Let's stay in touch with Robin!  BTW...Crawford Hill is on Amazon's Countdown during this book blast:

Amazon
Posted by Kabrini Message at 6:00 AM