So glad to welcome Milly back to our blog again!  This time we are privileged to be a stop on the world wide tour of Milly's latest novel, the recently released Scent of a Mate. 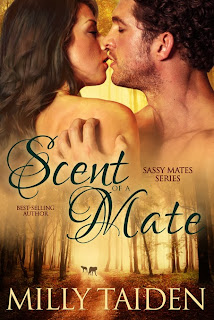 Mission: Scent a Mate.    Jordan Alvarez knew that a promise to her best friend involved staking out the local wolf pack's scenting ceremony and recording the graphic details, but she was the writer and the only one with the balls to finish the task. No one would know that four human women had sneaked proof of their rituals, or at least, that was the plan until Aric Wolfe showed up.

Mission: Stake a Claim  .  Aric Wolfe knew his baby sister was up to something, and expected her best friend, Jordan, to be in on the chaos. He finally had an opportunity to lay claim to a mate that had been under his nose for years. Jordan's scent called to both the man and the animal, and he was done fighting the call of the beast. It was time to mark his mate.

Mission: Survive an Alpha  .  When a good intention creates a problem for the Wolfe family, Jordan finds herself being stalked by a woman intent on claiming Aric as her own. Battle lines will be drawn, love will be put to the test, and Aric will have to fight Jordan's strong personality to keep her alive. Two alpha hearts seeking control will either find the balance or risk losing their love forever.

Scent of a Mate Book Trailer

Ellie’s smile dimmed. “Aric said, in time, you’d find your mate and for everyone to leave you alone to decide your life yourself.”
Her hope deflated. It was what she’d always told everyone. Somehow, hearing that he’d said the same made her want to run to the liquor store and buy a barrel of wine.
A sharp pain pierced her heart, deeper and deeper until she wanted to cry. Though Jordan would rather dance around naked in public than admit her feelings for Aric, she had secretly continued to hope. Now, that hope was dead.
“That’s true. I can decide my life myself.”
She remembered thinking the same thing the night of her senior prom, until Aric had seen her. Memories flooded her mind. She’d walked down the hall in her sapphire blue dress to find him in the living room with Ellie. He’d given her a look she’d never forget. It was the kind of look she’d always wanted to see from him. And he’d lifted a hand to her face, caressed her cheek, and told her she looked beautiful. She’d almost melted into a blue spot on the floor. Her previous concern at going to the prom dateless with only Ellie as her companion had flown out the window. He’d been the only thing on her mind the rest of that night.
She cleared her throat, unwilling to think about Aric any longer. “So, back to this scenting ceremony, what exactly happens?”
“Well…” Ellie’s pale features turned a dark crimson with embarrassment.
Jordan started to worry about what went on. Would it be some rated R stuff? “Well what?”
“First, they start out as wolves and sniff each other.” She glanced at Jordan and bit her lip. “To see if the animals feel any kind of attraction.”
That made sense. Considering they were going to be mated forever, they needed to know if they were both compatible as humans and wolves, so nothing strange there. She stared at Ellie expectantly.
“They shift into their human bodies and scent each other that way too.”
If Ellie’s face turned any redder, Jordan would need to throw some water on her to bring her temperature down. “Wait, they’re naked after their shift, aren’t they?”
Ellie nodded, glanced down at her glass of wine, and took a gulp. Oh. Yeah that would be little more than Jordan had expected, but nothing she couldn’t handle.
“It’s okay, Ellie, I’m sure it’s not as bad as you’re thinking.”
Ellie cleared her throat and downed the rest of wine.
“Why haven’t your parents pushed you into mating? I mean Kelly is like five years younger than you, so that makes her around twenty-five, right? But you are still unmated. And your parents don’t seem like they’ve lost their values. I mean your whole shifter history is based on pushing the males and females to mate as soon as they reach the right age. Go forth and make some fur balls and all that. Isn’t that what you’ve said before?”
Ellie shrugged. “Mom and dad are the pack leaders and don’t feel I need to be pushed into mating until I’m comfortable. Mom kind of had a hand at getting Kelly and Marco together, so that kept her occupied for a bit. Besides, the males are the ones that need to mate first. They continue our line and need mates as soon as possible.”
Aric would need a mate. Bone-crushing sadness enveloped her. She wanted to go hit something. Maybe shoot something. Dryness took over her throat. “So they’re going to get mates during this ceremony as well?”
Ellie nodded, her lips pursing. “If my mom has her way, yes. She’s invited a bevy of females for Aric, Mason, Nathan, and Jake to choose from.”
Her stomach knotted at the thought of Aric choosing another woman while she watched. Distress twisted massive knots in her stomach. It was definitely best for her to watch from a distance. If she caught some woman sniffing Aric, she might forget her composure and let her well-known temper loose.
“Are you sure you still want to do this?” Ellie’s gaze held a note of sympathy.
She nodded, folded her arms over her chest, and bit her lip. “If I want to write an accurate account about your kind in the book, then yes, I do.”
Where the hell were Karla, Emma and Nicole? This was ladies night. Okay, more like “let’s get drunk, man bash, and eat a lot night” but still. Her friends had never been late for wine and food.
She was about to open her mouth when the doorbell rang. The three consecutive rings indicated at least Emma and Karla had arrived. Emma always rang the bell three times in a row. It was like a nervous tick or something.
Jordan stood to open the door and her legs tried to fold under her. Shit, how many glasses had she had? She slowly made her way to the front door to let her friends inside.
Another round of rings met her at the door.

Enter to win!  Click on the link below for a chance to win a Kindle Paper White, tons of fabulous swag AND Amazon.com gift cards! 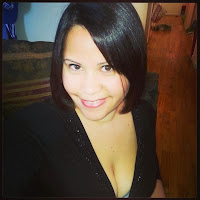 Want to know about me? Milly Taiden (aka April Angel) was born in the prettiest part of the Caribbean known as the Dominican Republic. She grew up between New York, Florida and Massachusetts. Currently, she resides in New York City with her husband, bossy young son and their little dog Speedy.
She’s addicted to shopping for shoes, chocolate (but who isn’t?) and Dunkin’ Donuts coffee. A bookworm when she can get her hands on a good story, she loves reading romance, thrillers and suspense.

~ Look for these titles from Milly Taiden ~