“27th April 1865 – What place is this in which I find myself? What manner of circumstance surrounds me? A wanted fugitive, hunted as though an animal, for that, maybe, is what I have become. No more than a hunted man, a man without hope. They will be here soon, my pursers. What have I done, and what have I become? I have helped to cause murder. I have brought shame on my father, and my beloved mother. I have brought shame upon the South. It would have been best had I never been born. Will I ever find peace? Not here and now, but with God’s forgiveness maybe there will be a kind of solace.”

His arm was beginning to pain once more. An hour or so ago he had hurt it once more, on the doorframe. He had stumbled and fell against the side of the door, and the wound had started to bleed once again. The sleeve of his tunic was drenched in scarlet. Red droplets were steadily falling on to the table, and staining the papers that he was writing on. The bullet was still deep inside. He could feel it. He could actually move it from side to side. He had lost a lot of blood, and felt quite weak. Infection had begun to set in.
He knew that there was a danger of gangrene setting in. If that happened then he would almost certainly lose the arm. He needed help badly, but there was none to be had. There was nowhere to go, no one to turn to. The young boy had tried to put a dressing on shortly after he had arrived at the house, but he did not know how to stop the bleeding, or how to treat the infection. He had wrapped gauze around the wound, tying it tightly to stem the blood flow. For a while it seemed to be effective, but since hitting the doorframe the bleeding had started once again.
It didn’t matter, not now, Thackery murmured. It was all too late, far too late.  It would all be over quite soon now anyway.

“Quite soon, and they will be here.” He looked down at the table and sighed deeply.
He looked up suddenly, startled by the sound of the approaching riders. He listened for a few moments. He did not need to see them, but he knew instinctively who they were. He also knew why they were there. It was hard now to remember how this had all come about. How had he got involved? He shook his head.  Insanity, he muttered. Killing Lincoln was nothing more than utter madness, futile.
“Did I really think that it was the right thing to do? That it was just?” Jacob murmured. “That, in some way, it would make a difference? Did I actually think that we could get away with it and that the authorities would just stand by and do nothing?” He shook his head, and hit the table hard with his fist. “What a fool I was.”
Why he couldn’t even remember the name of the man who had actually pulled the trigger. He could not remember whether he had actually met him. He shook his head once again. Of course he had met him. What was he thinking? Had he not been his shadow, his protector? Wasn’t he to be his replacement if anything had gone wrong?
“If anything had gone wrong,” he murmured, and started to laugh. Everything had gone wrong. He shook his head once again. And it had happened so quickly. Why it was only twelve days ago. No. He shook his head, and thought for a few moments, counting on his fingers. It was thirteen days. Just thirteen short days ago. It seemed like years ago, another lifetime, and another place. It was somehow unreal. He could not think straight. His memory was beginning to play tricks on him.
“But what was his name?” Jacob whispered. He shook his head once again. He could see him in the room with Jarvis and the others, at that first meeting. He could see him going into the theatre. He could see him coming out from the stage door of the theatre. He could see the soldiers dragging him from the barn. He shook his head and closed his eyes. He could see him lying on the ground, dead. But what was his name? He could not remember. It did not matter, not now. Nothing really mattered any more.
He shook his head. “Not so,” he murmured. “I will never see my mother, or father, again. That matters.” He started to shake. “That matters a great deal.”
The sound of the approaching horsemen became louder. He could hear the harnesses jangling. He could hear the horses breathing, and snorting. He could hear the pounding of the horses’ hooves. He listened for a few moments more. He could hear a loud thumping sound, the sound of his own heart beating faster and faster. He took two or three deep breaths and looked down at the table.
“They are here. They have come for me. It will soon be over.”
“They are here. They have come for me. It will soon be over.” 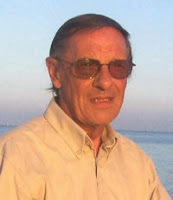 John Holt Biography
I was born in 1943 in Bishops Stortford, Hertfordshire. I currently live in Essex with my wife, Margaret, and my daughter Elizabeth. And not forgetting Missy, the cat who adopted us, and considered that we were worthy enough to live with her. For many years I was a Chartered Surveyor in local government. I was a Senior Project Manager with the Greater London Council from 1971 until it was closed down in 1986. I then set up my own surveying practice, retiring in 2008.
I suppose like many others I had always thought how good it would be to write a novel, but I could never think of a good enough plot. My first novel, “The Kammersee Affair”, published in 2006, was inspired by a holiday in the Austrian lake district. We were staying in Grundlsee. The next lake, Toplitzsee, was used by the German Navy during the war to test rockets, and torpedoes. As the war came to an end many items were hidden in the lake – millions of UK pounds, and US dollars, in counterfeit currency; jewellery stolen from the holocaust victims; and weapons. There were also rumours of gold bullion being hidden in that lake. Despite extensive searches the gold was never found. In my book, however, it is found, only in the next lake, Kammersee.
The books that followed, The Mackenzie File, The Marinski Affair, and Epidemic, all feature Tom Kendall, a down to earth private detective, and were originally published by Raider Publishing in New York. My fifth book, A Killing In The City, another featuring Tom Kendall, was originally published by Night Publishing. In August 2012 I decided to go down the self published route, and formed my own publishing brand PHOENIX. All five novels have now been published on PHOENIX. A sixth novel “The Thackery Journal” was published on 8 August 2013.
I am currently working on two other novels featuring Tom Kendall, and I have made a tentative start on an Adventure novel.

The Marinski Affair began as a dull mundane case involving a missing husband. Okay, so he was a rich missing husband, but he was nonetheless, still only a missing husband. The case soon developed into one involving robbery, kidnapping, blackmail and murder. But was there really a kidnapping? And exactly who is blackmailing who? Who actually carried out the robbery? Who committed the murders? Who can you trust? Who can you believe? Is anyone actually telling the truth? What have they got to hide? And what connection was there with a jewel theft that occurred four years previously? All is not as it seems. Tom Kendall, private detective, had the task of solving the mystery. He was usually pretty good at solving puzzles, but this one was different, somehow. It wasn’t that he didn’t have any of the pieces. Oh no, he wasn’t short of clues. It was just that none of the pieces seemed to fit together.

‘To make a killing in the City’ is a phrase often used within the financial world, to indicate making a large profit on investments, or through dealings on the stock market - the bigger the profit, the bigger the killing. However, Tom Kendall, a private detective, on holiday in London, has a different kind of killing in mind when he hears about the death of one of his fellow passengers who travelled with him on the plane from Miami. It was suicide apparently, a simple overdose of prescribed tablets. Kendall immediately offers his help to Scotland Yard. He is shocked when he is told his services will not be required. They can manage perfectly well without him, thank you.
http://www.amazon.com/Killing-In-The-City-ebook/dp/B0093N363S/ref=sr_1_1?s=digital-text&ie=UTF8&qid=1346663548&sr=1-1&keywords=a+killing+in+the+city
http://www.amazon.co.uk/Killing-In-The-City-ebook/dp/B0093N363S/ref=sr_1_1?s=digital-text&ie=UTF8&qid=1346663588&sr=1-1

The lake was flat and calm, with barely a ripple. Its dark waters glistening, reflecting the moonlight, as though it were a mirror. Fritz Marschall knew that neither he, nor his friend, should really have been there. They, like many others before them, had been attracted to the lake by the many rumors that had been circulating. He thought of the endless stories there had been, of treasures sunken in, or buried around the lake. He recalled the stories of the lake being used to develop torpedoes and rockets during the war. Looking out across the dark water, he wondered what secrets were hidden beneath the surface.
http://www.amazon.co.uk/The-Kammersee-Affair-ebook/dp/B009LHE1E4/ref=sr_1_1?s=digital-text&ie=UTF8&qid=1349541802&sr=1-1
http://www.amazon.com/The-Kammersee-Affair-ebook/dp/B009LHE1E4/ref=sr_1_1?s=digital-text&ie=UTF8&qid=1349541867&sr=1-1&keywords=the+kammersee+affair
� � m s 0#n ��� n";mso-bidi-theme-font:minor-bidi'>http://www.amazon.co.uk/Killing-In-The-City-ebook/dp/B0093N363S/ref=sr_1_1?s=digital-text&ie=UTF8&qid=1346663588&sr=1-1

Tom Kendall, a down to earth private detective, is asked to investigate the death of a young newspaper reporter. The evidence shows quite clearly that it was an accident: a simple, dreadful accident. That is the finding of the coroner and the local police. Furthermore, there were two witnesses. They saw the whole thing. But was it an accident, or was it something more sinister? Against a backdrop of a viral epidemic slowly spreading from Central America, a simple case soon places Kendall up against one of the largest drug companies in the country.
http://www.amazon.com/Epidemic-ebook/dp/B00BS9AIH2/ref=sr_1_4?s=digital-text&ie=UTF8&qid=1363206048&sr=1-4&keywords=epidemic
http://www.amazon.co.uk/Epidemic-ebook/dp/B00BS9AIH2/ref=sr_1_4?s=digital-text&ie=UTF8&qid=1363207975&sr=1-4
i;co� � b u 0#n ��� i-language:#00FF;mso-fareast-language: #00FF'>http://www.amazon.co.uk/Killing-In-The-City-ebook/dp/B0093N363S/ref=sr_1_1?s=digital-text&ie=UTF8&qid=1346663588&sr=1-1

Posted by Kabrini Message at 10:08 AM