Welcome back, Dan!  Today Dan will delve into the details and significance of June 21st, once considered mid-summer, now regarded as the start of summer.

It passed with little notice.  Another fact no longer holds for us from the varnished classroom of days gone by.
If you marked March 21 as the beginning of spring on your multiple choice science tests in 5th grade you were given credit for the correct answer.  Certainly the beginning of spring can, on occasion begin on March 20, but that was not available as a candidate of possible answers.  We have to keep it simple and direct.  After all, these are 5th graders.
What passed with little fanfare was March 21, 2007 Universal Time.  That was the last time for us that the beginning of spring fell on March 21.  The next time March 21 marks the beginning of spring will be in the year 2102 Universal Time.
How is this so?
The number of days in the year is 365.24218967 days.  Note the fraction.  The .24 is a quarter of a day, so to keep up the calendar in step with the seasons we have to add an extra day every four years.  The added day of the year is called a leap year.  Note however, that part of the fraction after .24 (the 218967 part of the number) also requires attention.  The rules to keep the wall calendar and seasons in agreement must change slightly.  The rule for the 218967 part of the fraction calls for a leap year whenever a whole number results by dividing the year by four (leap year) except for years which are both divisible by 100 and not divisible by 400.  This means the years 1700, 1800, and 1900 were not leap years but the year 2000 was a leap year. 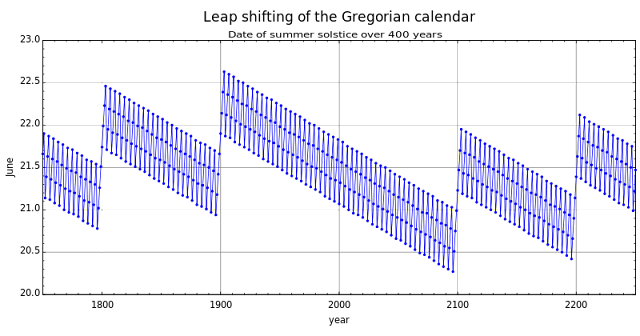 This change is minor compared to changes in "the good old days”.
What can the fifth grade student tell us about the upcoming June 21st?
"It is the beginning of summer”, is the most common reply.
"It is the longest day of the year”, is next in line, with nothing to follow.
If you lived in the United States prior to 1900, the beginning of summer was not June 21st but May 1st.  This is why there are so many May Day celebrations to this day in Europe.  August 1st marked the end of summer, while June 21st was the middle of summer.
June 21 is the traditional longest day of the year.  What is almost never mentioned is that it is consequently the shortest night.  The magic of an entire night must be squeezed and compressed into just a few short hours.  In St. Petersburg, at latitude 60 degrees north, there are 19 hours of daylight but just a few hours of dusk.  In fact it is called the "white night" for the lack of truly dark hours. 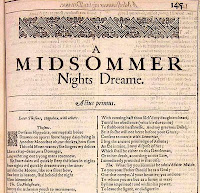 William Shakespeare thought the magic of the June 21 night was so powerful he decided to write a play.  The play is titled: "A Midsummer Night's Dream”, which centers on the activities of several lovers caught in the forest on the night of June 21st. Surrounded by the magic of nature, away from the social graces of city life, the inner forces of their psyche takes hold. How many of us place our heads down on our pillows the night of June 21st and realize we are about to enter a midsummer night's dream?  Can you experience that level of romance for an entire night and be sane the next morning?  If your response is disbelief, you are the one who loses because you have lost the opportunity to dream. 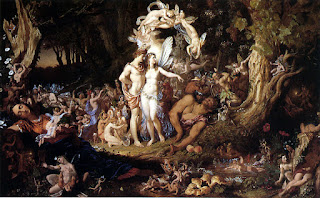 Even Shakespeare's play is but a faint echo to the white night activities surrounding St. Petersburg.  On the night of June 21st, from teenagers to senior citizens, it was off with all clothes and then they entered the forest for the entire night.  There was...well, you can use your own imagination.  Suffice to say nine months later around March 21st there was a considerable increase in the number of births.


With the advent of Christianity old observances were dropped.  With new ideas, dates were changed to June 24, the feast day of John the Baptist.  Gone were the old ways, in with the new.  Communism put an end to both the old and newer ways.  With the collapse of the Soviet Union, the end of communism, today there is noted a slight increase in births in St. Petersburg about March 21st.

Very enlightening and entertaining, as always!  Thank you very much Dan and Happy June 21st everyone!  As Dan pointed out, today is the longest day, but shortest night of the year - make the very most of it!!!