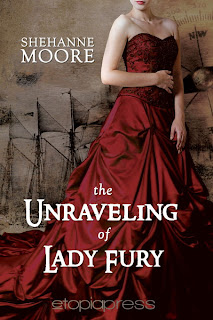 Good Morning Shehanne and thank you for joining us!  I love the book cover for "The Unraveling of Lady Fury" and can't wait to hear all about the story that goes with it!

“I don’t know. Ma always said—”
“Ma? What is this, old wives tales now? Next you’ll be telling me that if you’d kept your boots on, or I stood on my hands in the washbasin there, it would be a boy. Ma. Excuse me, I’m getting—”
“She was a midwife—before she was a whore,””

Firstly I want to thank Marie for asking me here today. Secondly l I swear to behave. Thirdly I want to say what a truly inspirational person Marie is. That her brother’s book is out is down to her in the first instance and I applaud that.


Okay, so...secondly? Well, secondly maybe I should substitute swear for try.  I don’t know if it possible given what I’ve just said about daeing it and buits if it is possible to fully behave. Not when the translation of these words is doing it and boots. I am sure you can guess what the oan is.  The yet too. Since my new release The Unraveling of Lady Fury centres round the heroine desperately needing to conceive an heir, it’s not hard to guess I will be looking at old wives tales.

Lady Fury actually has a thing about the hero’s boots ruining her lovely
silken damask bedcover. It’s enough to make her consider reviewing her rules on being fully clothed. Had she lived in my native city, that’s the advice she would have been given re the boots. . Although she’s not bothered whether it’s a girl or a boy she has, keep ‘em on and apparently a boy results. Yes.

Or from ? Eating honey guarantees a boy.

This one from nowhere in particular was probably written by a man. Seduce him.

, in a bid to elevate himself to grander accommodation and get Fury to renegotiate that ten rule contract, she slaps on him, starts spouting old wives tales he could have read straight off Google. Things about getting on top to have a boy. And getting particular food to eat.  He’s starving nothing more so he makes things up on the spot. Dare she disbelieve him though? Even though she wants to.

Let’s face it; people can get really nervy about conceiving. It’s a primal thing close to the hearts of most human beings.  And they can get desperate enough to believe, to try anything.—although Fury is just desperate to get rid of .  But it gave me the idea as the book progressed to have a bit of fun. How far would you go? How much would you believe?

And actually some of his old wives tales, about lying down afterwards are common sense. So obviously the old dearies weren’t as daft as all that!

She held up a hand. “Before you say another word, as I know you’re going to do, I know how much you dislike me. How much you pretend. Since the feeling is mutual, I think it’s best.”
In some corner of her soul, that wasn’t all that far, she knew this wasn’t the way to proceed and hope she would keep him, with his mile-high pride. But it was astonishing to think he believed he could do all that to her and she would still hold a candle in her heart for him. It didn’t matter he didn’t know all he’d done to her, which was maybe why he thought certain flames still burned.
“What about you getting on top?”
“Oh, I’ve been doing some research into that.”
“And?”
“And do you know—I never would have believed it—but it transpires that lying on my front is as good a way as any to conceive a boy. So long as you don’t stand up.”
Where she got this from she didn’t know. But she thanked heaven for it anyway.
“You saying Ma was wrong?”
“I’m not saying anything. I’m sure she was right, a knowledgeable woman like her. But, as you always used to say to me aboard the Calypso, there’s more than one way of being right.”

Widowed Lady Fury Shelton hasn’t lost everything—yet. As long as she produces the heir to the dukedom, she just might be able to keep her position. And her secrets. But when the callously irresistible Captain James “Flint” Blackmoore sails back into her life, Lady Fury panics. She must find a way to protect herself—and her future—from the man she’d rather see rotting in hell than sleeping in her bed. If she must bed him to keep her secrets, so be it. But she doesn’t have to like it. A set of firm rules for the bedroom will ensure that nothing goes awry. Because above all else, she must stop herself from wanting the one thing that can never give her. His heart.

Ex-privateer Flint Blackmoore has never been good at following the rules. Now, once again embroiled in a situation with the aptly named Lady Fury, he has no idea why he doesn’t simply do the wise thing and walk away. He knows he’s playing with fire, and that getting involved with her again is more dangerous than anything on the high seas. But he can’t understand why she’s so determined to hate him. He isn’t sure if the secret she keeps will make things harder—or easier—for him, but as the battle in the bedroom heats up, he knows at least one thing. Those silly rules of hers will have to go…