(thank you for this blog's second award:
The Versatile Blogger Award
and over 100,000 views for this series!!!)

Abraham's reinterpretation of the 12 Step program! 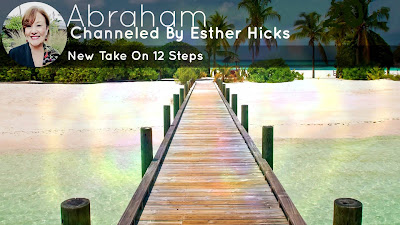 There has always seemed to me to be something fundamentally incorrect about the traditional 12-Step program.  I think it's that whole "I am powerless" thing mostly, but there are other things that don't ring true to me as well.  However, they have helped a lot of people and anything that works for even one person, I would not discourage.  But, to me, it's always seemed like it was in the right general direction, but not quite there.

I came across the 12 Step Program reinterpreted by Abraham and said, "That's it!"  It absolutely nailed everything that didn't resonate or "sit well" with me about the original 12 steps and then reinterpreted them.  At the same time, in no way discounting the fact that many people are helped by the original set of steps, we don't "throw them out", but rather add a second set of 12 to them.

Abraham explains that the reason the first 12 steps do work (at first!) is because it's a better feeling place than where an addict is coming to it from.  But after a while, as the steps begin to work, the person advances while the steps stay the same and when the individual advances beyond the steps, their recovery progresses to the point where they are more aligned with their higher self, who knows better than this.

Below is a direct transcript taken from an Abraham-Hicks workshop.  The above is my synopsis...for those who are not as familiar with the way Abraham phrases things and may want a "lay-person's" version!

Abraham: …we are not at all pushing against, in any way, the 12-step program because for someone whose life is in a very unpleasant place, all of those steps are downstream.

In other words, when you feel totally out of control, maybe it does feel downstream for you to admit that you’re out of control.  And to say, "I hope that there’s something, some power that’s greater than me that will help me" when your life is in a mess that’s the last moment in time that you really want to crow about how in control you are. So, acknowledging that you are powerless is a downstream step.  You see what we are getting at?

What we’ve noticed about the program, and we’ve interacted with so many people who have been part of it, is that in the beginning it is all downstream for them. But after a little while, when they begin gaining their balance, to say those same things are upstream for them. So it never really gives them the autonomy and self-control that they are all reaching for.

Every single one of them felt not free when they began this process that evolved into the alcoholism.  In other words, you’re right, they turn to the alcohol or whatever it was because it seemed like a path of least resistance.  It felt better to them than where they were. And there is something that we would like somebody to say to them about the rightness of that decision.  But the whole program, and in fact almost everybody ever involved in it, stands and says something else to them. They stand and say, ‘you were wrong to do what you did, you were not wise in what you were doing, and you should never, ever do something again.’

It’s sort of like...when a person feels not free, and they innately and naturally turn toward anger, that anger that they turn toward is the most natural thing in the world, but almost everybody would stop and say, ‘your anger is wrong, your anger is misplaced.’

So when you’re interacting with people that are experiencing the hugeness of disconnection, it’s not an easy thing for you to teach them the principles from their place of strong disconnection. Something more overt and in-their-face is necessary and it is easier to teach someone about action than it is to teach them about vibration.  In an action oriented world, it’s easier to say to them, "this alcohol is your problem" than "your vibrational countenance is your problem."

First, let's take a look at the original 12 Steps: 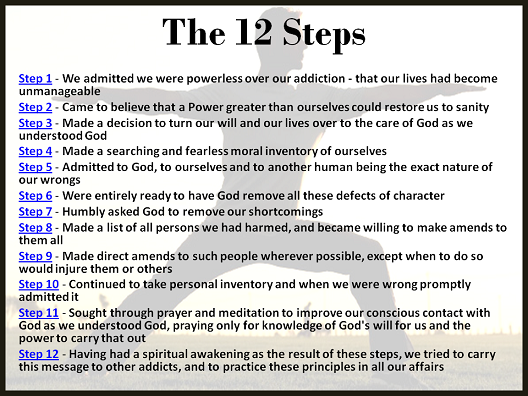 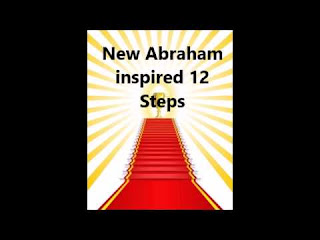 You knew I'd have videos!
These are really very good - please watch!

Links to purchase Abraham-Hicks Beyond the 12 Steps:  Breaking Free of Addiction program - available on DVD as well as Audio CD 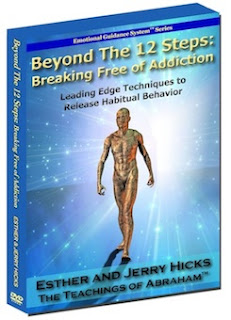 Beyond the 12 Steps: Breaking Free of Addiction (DVD) 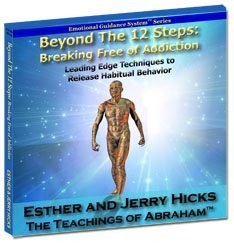 Beyond the 12 Steps: Breaking Free of Addiction (Audio CD)

Posted by Kabrini Message at 12:36 AM