So happy to be a part of Author Sofia Grey's "Release Day Blitz" for her new novel, Craving, the latest (Book #2) in the Talisman Series!

Tagline:
A deal with a demon, a biker psychic and the girl who might just be his salvation... if the demon doesn’t get to her first.

Blurb:
Dante isn’t your typical medium. With his leather jacket, tattoos and piercings, he looks more at home on his motorbike than he does holding a séance and Katherine has no intention of getting involved with him. He's the complete opposite of the kind of man she wants and represents everything she's tried to leave behind, but she needs a medium and he’s the best one around.


Dante’s never allowed himself to get close to anyone for fear of putting them in danger. His craving for Katherine is about to bring his worst nightmares to life. ~ 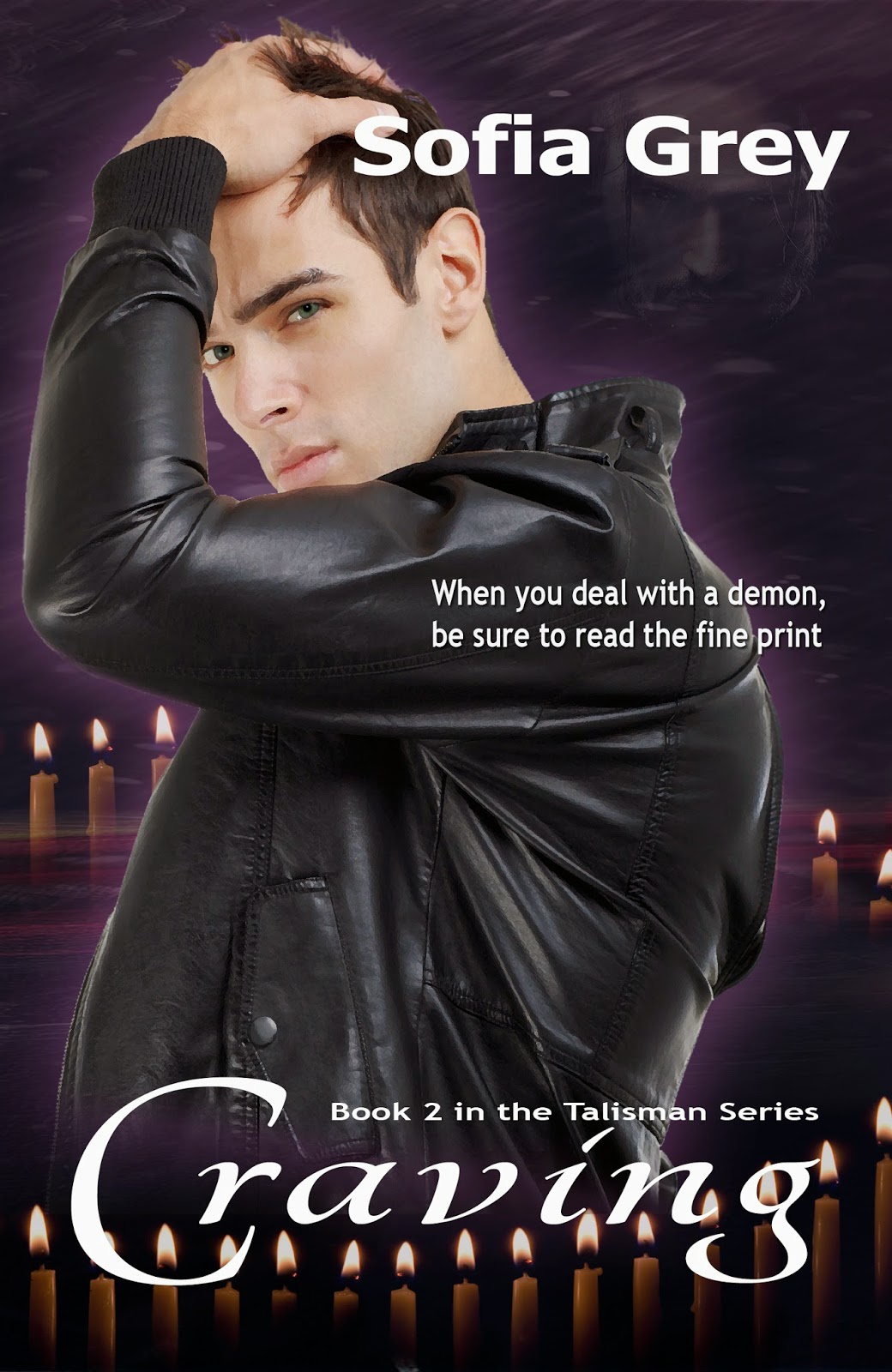 Excerpt:
Dante’s breath hitched. He flinched, and a shudder ran up my arm. As he lifted his head I felt the temperature plummet. The candles nearest to him flickered and bobbed as though in a breeze and I shivered, chills oozing down my neck.
“Hello, Gabriel.” Dante sounded polite, respectful. Beside me, Suki gasped, her fingers closing tighter around my hand. One by one, the candles flickered and stuttered, the flames waved crazily and almost blew out, before righting themselves. It looked as though an unseen child crawled around the room, puffing at each one in turn. I shivered and tucked my feet in tighter, huddling into myself to keep warm.
“Please show yourself to the circle. Come and talk to us, Gabriel.”
I wrinkled my nose. What was that weird smell? Like rotting meat.
The outer candles shimmied in turn, but faster now. Dante spoke again, calm and measured. “Gabriel. I summon you to the circle.”
Suki’s chest heaved, her eyes wide and scared in the dim lights.
The candlelight steadied. Dante’s hand relaxed a fraction, and he sucked in a deep breath. Was this it? Would Gabe appear? The stink faded, and I turned my head to look at Dante just as Suki squealed and a tiny spotlight in the ceiling exploded. Poof. One by one, the recessed bulbs sparked and shattered, tiny glass fragments raining down on us. Poof. Josh swore under his breath and I sought my voice. Poof.
“Don’t break the circle, keep your hands linked.” Yes, I’d taken Nanette’s role.
Poof. Slivers of glass in my hair. I gripped Dante ever tighter. I kept my head down to avoid the falling glass, but focused on him through the curtain of my hair. He stared at the far wall, his face a mask. I looked too. A column of mist hovered in front of the door, tendrils snaked along the floor and washed around the circle, nudging the salt lines. It’s trying to get in, I realized, my heart speeding up. Poof. The final spotlight blew out, leaving us illuminated only by candles. I shivered, trembling from head to toe. My teeth would be chattering in another minute.
Dante gasped, and his head lolled forward. I blinked as the room began to dim. Oh God. One by one, the outer candles winked out, invisible fingers pinching the wicks. I could feel Suki’s terror, the trembling cascading down through her hand. I tried to stay calm. Just the inner eight candles left. The stink of rotting meat returned. I wanted to cover my nose, but daren’t break the circle. And then Dante spoke in a voice I didn’t recognize.

If you haven’t read Obsession, Book 1 in the Talisman series, you can download if NOW for a limited time at 0.99!!! 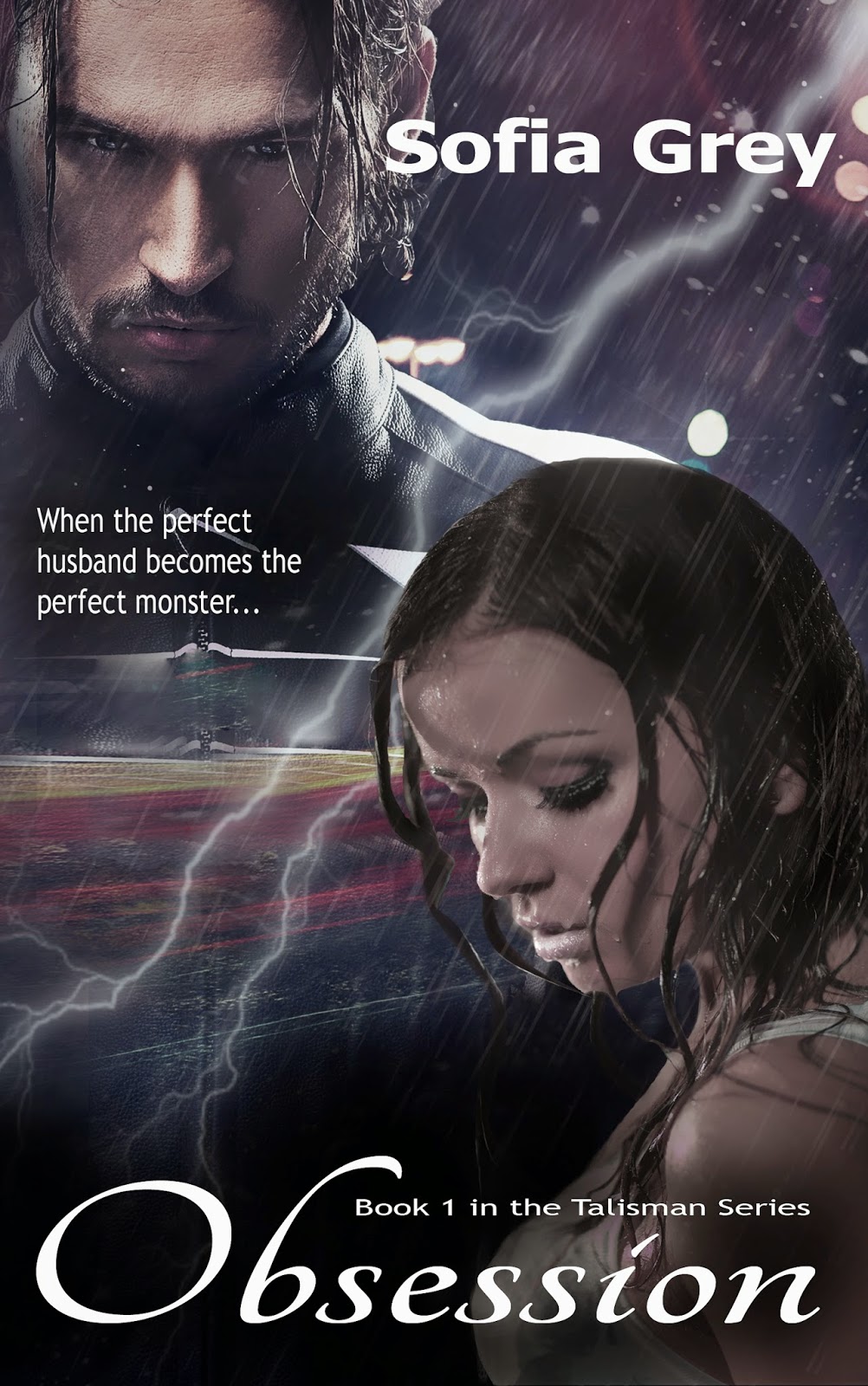 Blurb:
Josh Delaney is the ideal honey trap. His charm and model good looks would be enough for most women, but coupled with his psychic ability to read their thoughts, he’s impossible to resist. Suspicious husbands employ him to test their wives, to see if they can be tempted to stray.
High profile couple Suki and Gabe Bridgewater have the perfect marriage, or at least, that’s the image they portray to the world. Behind closed doors, Gabe’s dominance in the marriage is unravelling and he decides to test Suki, using Josh as bait.
For Josh it should be just another easy job, but two things go horribly wrong.
One, Josh falls in love with Suki.
And two, Gabe refuses to let her go.

Author Bio.:
Romance author Sofia Grey spends her days managing projects in the corporate world and her nights hanging out with wolf shifters and alpha males. She devours pretty much anything in the fiction line, but she prefers her romances to be hot, and her heroes to have hidden depths. When writing, she enjoys peeling back the layers to expose her characters’ flaws and always makes them work hard for their happy endings.

Music is interwoven so tightly into my writing that I can’t untangle the two. Either I’m listening to a playlist on my iPod, have music seeping from my laptop speakers, or there’s a song playing in my head – sometimes on auto-repeat.

Catch me blogging with Allyson Lindt at www.GeminiGirls.com


Posted by Kabrini Message at 6:00 AM