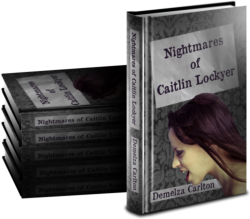 We are so pleased to be a part of, Author Demelza Carlton's Blog Tour for her novel, Nightmares of Caitlin Lockyer.

Before we delve into an excerpt of Nightmares of Caitlin Lockyer, here is a brief Author Bio on Demelza Carlton:

Demelza Carlton has always loved the ocean, but on her first snorkelling trip she found she was afraid of fish.
She has since swum with sea lions, sharks and sea cucumbers and stood on spray-drenched cliffs over a seething sea as a seven-metre cyclonic swell surged in, shattering a shipwreck below.

Sensationalist spin? No - Demelza tends to take a camera with her so she can capture and share the moment later; shipwrecks, sharks and all.

The Ocean's Gift series was her first foray into fiction, followed by the Nightmares trilogy.

And now for an Excerpt From Nightmares of Caitlin Lockyer:

"You're mad," my sister told me, handing me the bag of clothes I'd asked for. "You find some random girl left for dead on a beach, promise you'll protect her from someone who hurt her who's already dead, only to find out he has mates, so you're going to stick around to protect her from all of them, too? It could be years before the police put them away – if they ever find them! What are you going to do, stay with her for the rest of her life? Marry her?" She snorted with laughter.
I shook my head, rubbing at my bleary eyes in the hope that it would wake me up. Caitlin had woken me with her screaming more than once last night. "I promised I'd be here when she wakes up. She's been out for longer than I expected, is all. She's been through more than anyone should ever have to and I'm not going to do that to her – just go home and let her wake up alone."
Chris was quick to notice the gaps in my explanation. "How do you know what she's been through? She's barely been conscious since you found her!"
"I don't," I admitted. "But... she has nightmares... even with the drugs they're giving her, and they sound pretty bad. And... I saw what she looked like when I found her. It wasn't pretty." I suppressed a shudder, but she noticed anyway.
"How bad is it? Can I see her?"
We were in the lounge at the end of the ward. It was only a short walk back to Caitlin's room, but still I hesitated. "Don't touch her," I warned. If she touched her, she'd scream again and I couldn't handle it. I just couldn't.
"Wh..." She started to ask a question, but she looked like she was having trouble deciding which to ask first. Why she'd want to touch her, why she couldn't, or even what in hell I was thinking. Instead, she shrugged and followed me back to the hospital room.
She thought I was crazy. She could be right.
The guard outside the door looked askance at Chris. I nodded to him and he let her pass unchallenged. Chris didn't acknowledge the police officer at all.
She stopped just inside the door and stared, looking puzzled.
I looked closely at Caitlin, trying to work out precisely what Chris was staring at.
It couldn't be the bruises on Caitlin's pale face. They'd faded to faint shadows now. She looked as beautiful as the first day I'd seen her.
Caitlin's hands rested by her face on the pillow, each finger individually bandaged and splinted, an IV line slipped between the gauze. The bandages extended down her wrists, like long, white gloves. She wore a hospital-issue nightgown and she'd managed to kick the bedclothes off in her struggle against her nightmares, so everything the scanty nightgown didn't cover was on show. White dressings were stuck to her back, with more on her legs, particularly her ankles and her thighs. Bruises covered her exposed skin in a disturbing rainbow of dark colours.
Before I could stop her, Chris crossed the room and grabbed Caitlin's sheet. She yanked it up to Caitlin's chin, covering her up almost completely. Her eyes turned to me. "You need to take your own advice."
I was annoyed at my sister. "It's not like that. Have you ever known me to take advantage of a girl, without her permission?"
Chris frowned deeply, her eyebrows almost meeting. "She's not like any of the girls you usually bring home. She's younger, more fragile..." She stopped, looking lost for words, before her tone changed abruptly. "How in hell did this little girl survive all that?" She waved a hand over Caitlin's body, encompassing everything now covered by the sheet.
"No one knows," I told her shortly, sitting heavily on the visitor's chair by Caitlin's bed. "But when she wakes up, it's one of the first things I'll ask her."
Ah, who was I kidding? It was a bloody nightmare.


I'm intrigued and can't wait to read more (which is the point of a good excerpt, right?)!  Here's how to do just that:  Buy Now On Amazon.com!

Also, you can check out the video trailer here.